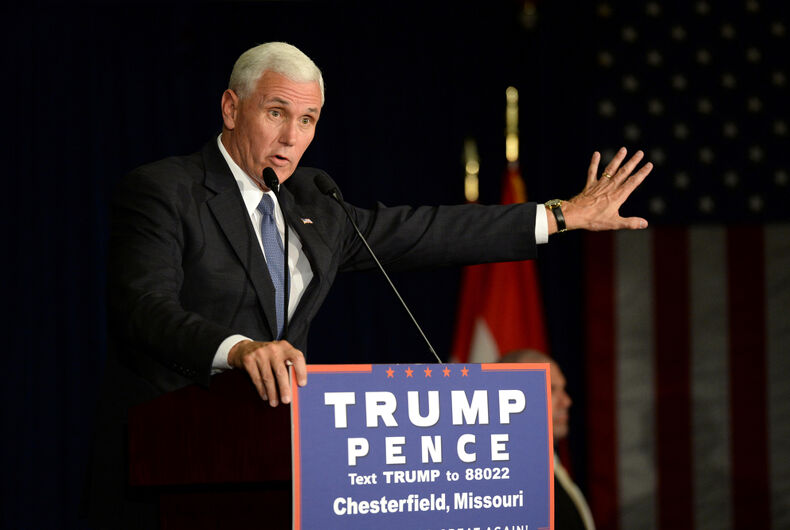 Vice President Mike Pence just can’t help himself. America’s best known anti-LGBTQ politician, the former governor of Indiana, says he doesn’t want to talk about Pete Buttigieg, the out Democratic presidential candidate from the Hoosier state, but he continues to do it.

Possibly because the media won’t let him escape the topic. Even Fox News is questioning Pence over his snide attacks on the mayor of South Bend that questions the gay candidate’s religious faith.

“If he wins their party’s nomination, we’ll have a lot more to say about him,” Pence told Fox News’ Shannon Bream in an interview this week. But he continued to say he didn’t like Buttigieg’s “assertion and others’ assertion that was critical of people of our religious beliefs, broadly.”

As governor of Indiana, Pence signed a law that would have allowed Christians to openly discriminate against LGBTQ people. The state legislature later changed the law to prevent the possibility, but Pence, with the support of far-right Christian extremist groups in the state, continued to support it.

Related: Mike Pence whines that America has ‘little tolerance’ for Christians if he can’t be antigay

Buttigieg was the mayor of South Bend at the time and has said it helped spur him to come out of the closet.

During a speech at a Victory Fund event, Buttigieg said he had a message for the “Mike Pence’s” of the world: “That if you have a problem with who I am, your problem is not with me. Your quarrel, sir, is with my creator,” he said.

Pence responded to that quote in the interview, saying, “I remember a reference to the Mike Pences of the world. And I think every American cherishes the right of each of us to really live out our faith and live out our beliefs.”

“I’m not interested in feuding with the vice president, but if he wanted to clear this up, he could come out today and say he’s changed his mind that it shouldn’t be legal to discriminate against anybody in this country for who they are,” Buttigieg told Ellen DeGeneres. “That’s all.”

And that’s the one thing Pence has been unwilling to say.

Spoke to @ShannonBream about the rise of religious persecution at home &abroad. From the burning of 3 historically black churches in Louisiana, to attacks on churches in Sri Lanka, mosques in New Zealand, & 2 synagogues in the US —persecution of people of faith must be condemned. pic.twitter.com/1HfrJkXBgm