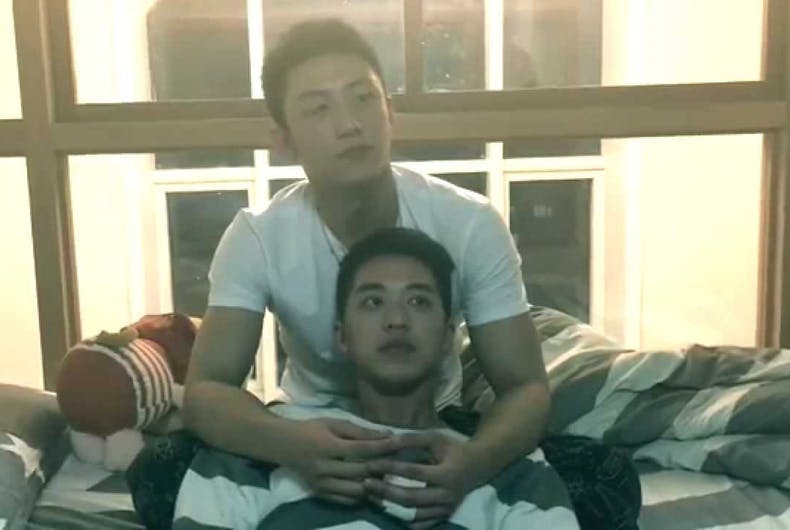 A scene from "Addicted," a Chinese web series that was pulled from the internet by government censors. Photo: Screenshot

A gay 15-year-old who left a suicide note on social media was found earlier today and is currently safe. The teen, who has not been named in the media, lives in the Chinese city of Qingdao, a city of six million.

He wrote a long post on Weibo, a Chinese social media platform, that described the abuse he faced from a homophobic society.

“Growing up a frail and meek boy, I am that ‘fem’ everyone is referring to,” he wrote. “An easy target, bullied, assaulted, teased, abused, and shunned by classmates and teachers alike.”

“This is how I grew up, and so did many other gay children.”

He said that he came to realize he was gay and, though a good student, he was bullied at school and beaten by his teacher for not being masculine enough.

He came out to his mother, who he said tolerated his sexual orientation, but between the bullying he faced at school and the abuse he faced from his father, he was going to take his own life. He apologized for his “cowardice” in the note.

The post received tens of thousands of comments, mostly supportive. He was found ten hours later by police.

Homosexuality is legal in China, but marriage equality and adoption by same-sex couples are not, and the law does not ban discrimination against LGBTQ people.

China’s government has taken steps to keep LGBTQ ideas out of the media, like banning LGBTQ topics from the internet and television, calling homosexuality “abnormal sexual relationships and behaviors.”

Earlier this year, China censored gay content in the film Bohemian Rhapsody and plans to do the same to the Elton John biopic Rocket Man.

A recent survey found that 85% of LGBTQ students in China are depressed and 40% have considered suicide.

The entire post from the anonymous gay teen is below, translated to English by the Beijing LGBT Center.

I am from Qingdao and am a 15-year-old student from Laoshan No.8 Secondary School.

I am a homosexual. I never expected I would be able to utter this word.

Growing up a frail and meek boy, I am that ‘fem’ everyone is referring to. An easy target, bullied, assaulted, teased, abused, and shunned by classmates and teachers alike. This is how I grew up, and so did many other gay children. Naive as I was, I did not fight back or told anyone about my feelings. I was afraid, and am still afraid of this world. I acted strangely and they called me lunatic, but I know that was my only way to protect myself. After I tried in vain to fit in, I chose to close myself from this world, and this is how I lived my childhood.

By sheer luck, I had a short childhood. I started to realize what’s ‘strange’ with me in grade 5 or 6. I remember how I exulted when I first read about affirmative answers about gay on Zhihu [Chinese version of Quora]. But I was soon overwhelmed by those derogatory, abusive, and hurtful answers. I cried the whole night and yet I put my mask back on the very next morning. What people saw as maturity in me was in fact avoidance and isolation.

Things got a little better in secondary school because I am a top student. There was less bullying but I reminded that fem guy teased and mocked at by everyone. Among the worst was my class teacher, Chen Feng. For two years he inflicted me with corporal punishments. Listening to him indoctrinating his banal views was pure suffering. I’ve got enough of his so-called masculinity values, his genders have their fixed roles, his homosexuals are modern perverts. Yet he is not alone among his peers and colleagues. I have had enough of my teachers’ cursing, smearing, ridiculing, and insulting anything related to gays. All their rubbish made me sick and isolated.

Gradually I become irritable and violent. I came out to my mother rather abruptly. Though she seemed to have acquiesced it, I was giving in to the pressure and thinking about ending everything. I have no idea what happened to me and I know choosing death is not courageous, but rather an act of cowardice. I chose to avoid my family and I knew my indifference and avoidance hurt them, especially my mom, the one person who loves me the most.

My father is a weak and arrogant scum and inflicted my mother her whole life. He broke down my door when I was most vulnerable and isolated and banged my head on the wall. At that moment, I only wished he could kill me. But he was stopped by my sister.

Just now, my so-called “family” once again stormed my room and hurled their most insulting curses at me. I realized that my mom might be the only person who can accept me in this world. Or maybe she was just pretending too.

This is not the first time I’ve thought about dying to end it all. Just a few days ago, I scaled high trying to leave all these sufferings. When I called my mom to hear her voice one last time, I hesitated, climbed down and wandered for miles away from home.

Now I have once again escaped from home with that scum’s phone in my hand. Yes, this account is my father’s. I want to tell the world what I’ve always wanted to say and to do. And then leave this world forever.

I understand living on might be the better choice. I could have a bright future and watch this world getting more open and inclusive. But I have had enough. I am sorry to have vented everything on here, and I am sorry to be so weak my entire life. I wanted to do something for this world but in reality, I can do nothing. I know, China will not have its own Stonewall; its people can put up with anything. I am losing control of emotion…

I apologize for my cowardice. To be honest, I am not innocent. But even if I had the courage to change the world, a stab in the back could have easily killed me. I have chosen to solve the radical question with the radical way.

I love you all, the kind and beautiful people of conscience, I trust you to make the world better. If there were a heaven, I will send my blessings… I wish my story will be a faint voice to your fight.