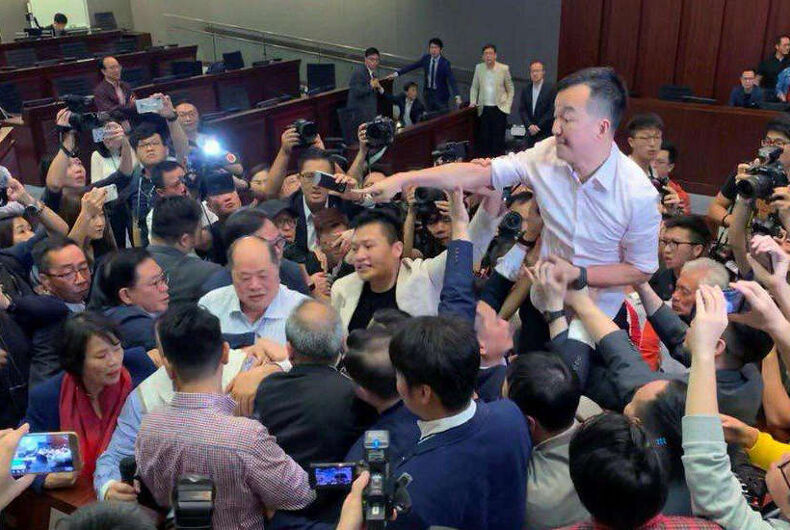 Hong Kong’s only gay legislator got into a brawl on the floor of Parliament as the cameras rolled live on television. Several lawmakers were injured during the fracas and one was taken to the hospital.

As lawmakers debated a controversial bill that would allow criminals to be removed from the city state without a formal extradition treaty. Many residents fear how China would abuse the process as a way to stifle dissent and describe it as an “authoritarian” maneuver.

A former British colony, Hong Kong was returned to China in 1997 after the communist country agreed to allow the city state to maintain a “one country two systems” governance that gives Hong Kong more freedom than in mainland China.

Lawmaker Ray Chan, however, is adamantly opposed to the law since it would violate residents’ human rights.

“For those who know me,” Chan tweeted after the fracas, “I usually keep a meek composure, practice meditation, prefer non-alcoholic drinks, and treat everyone with respect. But when an authoritarian state strikes, every fiber of my being turns into a fighter for my constituents.”

Video of the brawl shows Chan jumping on a table, shouting, and gesticulating wildly while other legislators attempt to grab his arms. He is not shown violently striking any of his fellow lawmakers.

BBC explains what happened with few words and in simple English that everyone is able to understand: "A fight broke out in the Hong Kong parliament, over plans that would allow suspects to be sent to mainland China." I add: Gov't told a bunch of lies.https://t.co/kkpjyNPKgt