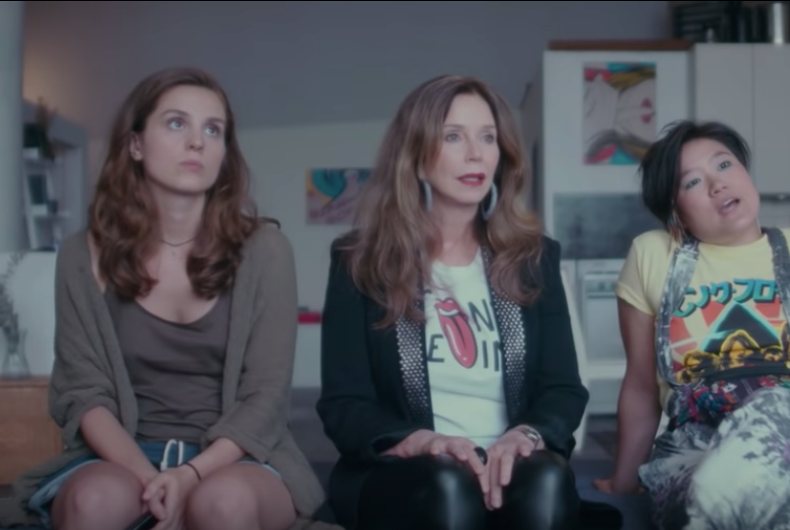 Harper, her mother Val and Harper's roommate Devon commiserate about the difficulties on online dating in season one of "Queering"Photo: Queering / YouTube

Nobody knows when exactly The L Word reboot will air on Showtime. So while you’re waiting, check out Queering, a funny and down-to-earth web-series for and by queer women. It has a predominantly female cast, the best bisexual character we’ve ever seen and you can watch its first two seasons entirely free on YouTube; the whole thing is about an hour and a half long — perfect for binge watching.

If you wanna jump right in, the first episode of Queering season one is here below. But if you want to learn more, check out our synopsis and interview with director Leticia De Bortoli and Queering‘s three main actresses which follows.

Queering made an appearance at last month’s SXSW 2019 Festivals and Conferences (one of the only queer TV shows among its other queer offerings).

Harper (Sophia Grasso), a 30-ish lesbian living in New York City, has just broken up with Mackenzie, her girlfriend of nine years who left her to marry a guy. At a bar, Harper tells her date, “It’s like I woke up from a coma and I have no f*cking idea what’s going on.”

Unbeknownst to her, her 60-something-year-old mom Val (Susan Gallagher) has recently left her father after a sexual awakening with her Pilates instructor. Harper’s hilarious roommate Devon (Diana Oh) is totally supportive — “I love Pilates lesbians,” she coos — but Harper totally isn’t. “I just want you to understand,” Harper tells her mom, “you’re not bisexual — it’s rude.”

So while Devon happily introduces Val to the finer points of tongue exercises, cannabis smoking and being a “Pillow Princess,” Harper must confront her biphobia while dealing with her mom newly dating women and tagging along to lesbian bars.

“God, I just wanna be me,” Val tells her daughter during a heart-to-heart, “not mom, not Frank’s wife, not John’s daughter, not ‘Casserole Val.'”

As a lesbian woman who has been bi-phobic in the past (and who’d admittedly be taken aback if her own mother came out as bi), Di Bortoli tells LGBTQ Nation she wanted to explore bi-phobia through a lesbian woman’s vantage point.

She wrote Queering to explore the spoken and unspoken walls that went up between her and her mom after she came out. But she inverted that relationship in her web series by having a mother come out as bi to her bi-phobic daughter.

Di Bortoli and a bisexual woman co-wrote the script, and 70 percent of Di Bortoli’s international cast and crew were either queer, female or both. This predominantly queer and female crew helped generate a creative atmosphere different from the macho-energy that can create tension on other film sets, Di Bortoli says.

Oh, the actress who plays Devon, tells LGBTQ Nation, “The vibe that [Di Bortoli] has on set is so awesome and so positive. Even when everything’s going wrong… she doesn’t freak out an it allows you to channel the positivity into the work.”

Queering uses comedy to engage and invest viewers in the drama. As the story plays out in Harper and Devon’s apartment, the city streets and all-female gatherings, the warm and intimate dialogue sounds like we’re listening in on the characters’ most private moments.

Val’s initiation into queer womanhood forms the series’ backbone, and it’s hard not to empathize with her. She’s grounded, owns her beauty and pushes back against her daughter’s prejudice, but she’s also a new to same-sex romance, and her vulnerability and openness make her instantly likable.

“As the old broad in the crowd,” Gallagher says, “I think it’s so important to have someone past middle age because there’s some forgotten population out there and the women in the community who are older are sometimes overlooked.”

A male character doesn’t appear until the third episode of the second season — something that’s deliberate yet easy to overlook. And yet, the core characters’ humor and relatability makes the series welcoming to all viewers, even non-female and non-queer ones.

Gesturing to Grasso and Oh, Gallagher tells LGBTQ Nation, “[Queering is] not just about Val and our sexuality. It’s about mother-daughter relationships, it’s about relationships with your siblings, your friends and how people change when you come out and the fear that is also involved… It touches on a lot of the struggles that we all face in our lives.”

Harper’s biphobia could’ve made her over-dramatic and unlikable, but Grasso depicts Harper as a loving and conflicted woman. Harper’s messed up relationships have caused her to put up a protective wall, Grasso tells LGBTQ Nation, and she ends up re-directing her anger towards her mom’s newfound bisexuality rather than addressing the real source (something Harper explores in the show’s second season).`

“Like so many things, like racism or sexism,” Grasso says, “there’s a lot of ignorance, but also a lot of anger and hate that’s very misguided. People pick out [their biases] and it makes it so much easier [to focus on that]” rather than the source of their pain.

Though all the characters have their comedic and dramatic moments, Devon effectively provides most of the comic relief with her animated physical humor and matter-of-fact punchline delivery. Oh’s a real-life musician who sings and plays the ukulele in the show. They’re also a multi-disciplinary queer artist who feels very “undefinable” and “gender fluid,” they tell LGBTQ Nation.

And yet Devon never comes off as a one-dimensional, especially as the second season delves into their family dynamics and social life.

“Never in my life did I think that this kind of visibility would be possible,” Oh says of her character. “When you really step back, you’re like, ‘Holy crap. That is a Korean-American character unapologetically standing in their sex-positivity, their queerness, their personality, their joy, their desire and it’s not sexual and it’s completely genuine and funny. The complexity there alone is so three-dimensional and has futurity.”

“So much about it is about visibility and permission,” they add, as all three main actresses say that viewers have reached out to share their coming out experiences and stories of relating to their families, evidence of the show’s powerful authenticity.

Queering is especially important considering the dearth of queer female content in the world. In Di Bortoli’s home country of Brazil, there are zero shows about queer women, and in the rare event that one appears, they’re often heavily sexualized or stereotyped.

“In Brazil, being LGBTQ is a completely different experience than in the U.S.,” Di Bortoli tells LGBTQ Nation. “Now it is probably one of the least safest times that we’ve had in the country with the new presidency. So it’s always in my mind.”

She adds that queer, people of color and female creators especially face so much more hardship to get their work made, which makes viewing, sharing and supporting their work all the more important. She’s currently developing a coming-of-age screenplay about queer kids in rural Brazil.

Here is a video of LGBTQ Nation‘s interview with Di Bortoli, Grasso, Oh and Gallagher.

Why Pete Buttigieg is good for gays