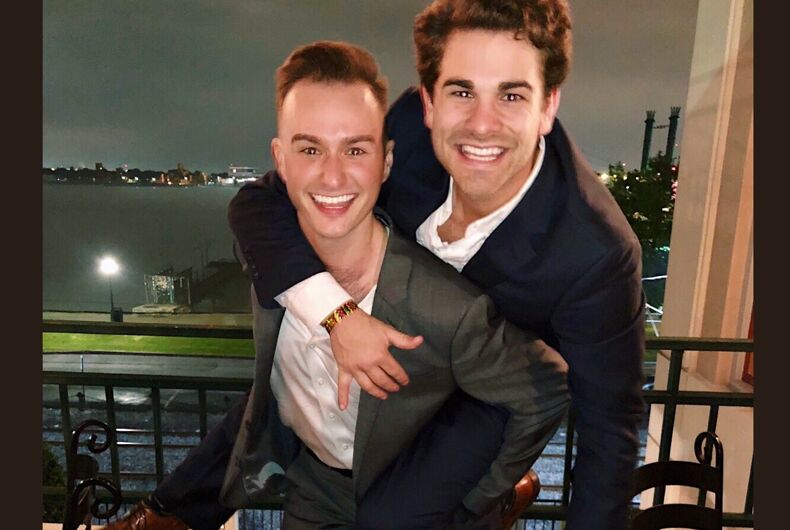 A tweet from a nursing student about his best friend Trent went viral after other social media users to started naming their own "Trent" in responsePhoto: Twitter/yuhhboybryce

When nursing student Bryce shared a short story about his best friend, Trent, on Twitter, he had no idea that it would strike a chord with gay Twitter and spawn a slew of heartwarming replies.

Bryce didn’t have a date for his nursing school formal, he wrote, and when he complained to Trent, he got an unexpected reply.

“Why didn’t you ask me?” Trent asked according to Bryce.

“Bryce, we’ve been buddies for years & it kinda hurts my feelings u think I still care what people say,” Trent shot back.

“In my opinion, everyone needs a Trent,” Bryce sent as the closing to the sweet tale.

As gay Twitter quickly rocketed the tweet to go viral, users started sharing stories of their own “Trents,” creating a beautiful thread of inspiring stories about straight allies.

After his brief story started bouncing around the internet, Bryce shared how the popularity and reactions had moved him.

“Seeing the responses of people who have someone in their life like my friend is honestly so reassuring. Like yes, men are trash. We get that. But there really are some gems out there w amazing hearts, who actually treat people as people (a concept you’d think everyone grasps),” he wrote in followup tweets.

“I mean they should grasp it, but not everyone does for whatever reason. Aaaannnnnyyyyways. I figured this tweet would get positive feedback, but def didn’t think I would take it so personally (in the best way possible).”

“It’s just nice seeing other’s support systems regardless of what society labels them as, or how they personally identify themselves,” he tweeted. “There’s so much hate surrounding us in the world, but seeing some love shine through gives me hope for both the near & distant future.”

My Trent is a Josh. He’s had my back since we first met & it’s never been about him being straight or me being gay. He’s one of my best friends, my partner in crime, wicked banterer, & the guy who secretly loves takin pics with me. Quite lucky to have him pic.twitter.com/M7OBo3tI2V

This makes me so happy & I’m blessed to have so many ‘Trents’ in my life honestly ❤️ pic.twitter.com/81Td8KMvd9

Here’s my Trent, I couldn’t ask for anyone better to have my back at all cost no matter what 🤗 @JROB_TF he’s single ladies!! pic.twitter.com/6ELuBdsdxy

@c_gonzales01 is my Trent 💕😭 been buddies since 6th grade pic.twitter.com/ZTF1schtKQ

Glad that i have my very own Trents pic.twitter.com/X0cDRVUKXz

seeing all of the men in these replies supporting their gay male friends and being so secure in their sexuality is so beautiful and refreshing. I hope you ALL find your Trent :’)🌸🌈

I’m not crying, my eye bags are just perspiring