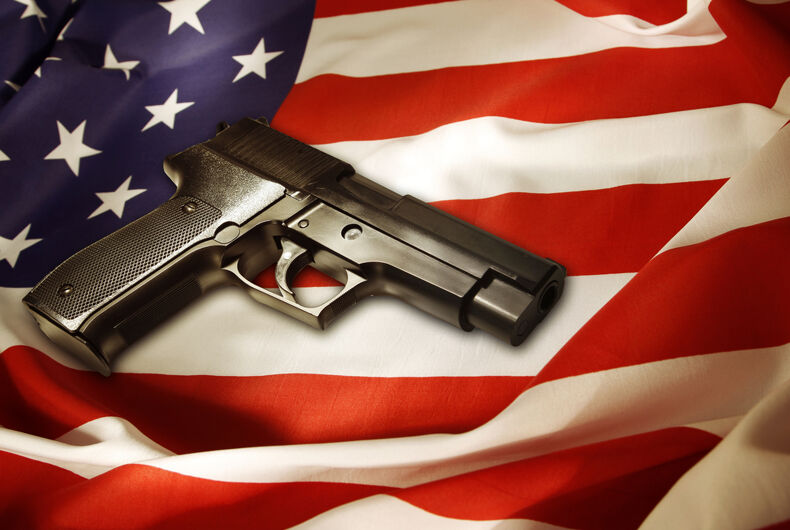 “We pledge allegiance to the manufacturers and the NRA of America, and to the campaign funds for which they give, one notion under God, unconditional, with denial and defiance for all.”

The Pledge Taken by Too Many Politicians

The framers of the United States Constitution guaranteed its “free” people a right to carry and shoot terrifying weapons but enslaved and transported countless Africans against their will to serve as dehumanized beasts of burden.

The framers of the United States Constitution guaranteed its “free” people a right to carry and shoot terrifying weapons but gave the right to vote only to white men.

The framers of the United States Constitution guaranteed its “free” people a right to carry and shoot terrifying weapons but robbed the Natives who had preceded them by thousands of years of their lands and livelihoods.

The framers of the United States Constitution guaranteed its “free” people a right to carry and shoot terrifying weapons but considered no provisions for the universal education of its people.

The framers of the United States Constitution guaranteed its “free” people a right to carry and shoot terrifying weapons but disallowed girls and women from attending most institutions of higher education or holding property on their own.

The framers of the United States Constitution guaranteed its “free” people a right to carry and shoot terrifying weapons but made no provisions for quality, affordable healthcare as a universal condition of civil society.

The framers of the United States Constitution guaranteed its “free” people a right to carry and shoot terrifying weapons but abandoned retirees to fend for themselves as well as those in times of economic and physical hardships with few or no safety nets of security.

The framers of the United States Constitution guaranteed its “free” people a right to carry and shoot terrifying weapons but neglected to provide a regulatory mechanism to better sustain our natural resources and protect the planetary environment.

While wise men crafted what many today consider as a brilliant and enduring blueprint for a new nation, they were products of their times with individual human shortcomings and biases.

Just coming off a war of independence against one of the world’s great colonial powers, it was reasonable to expect the leaders to ensure people the capability of defending themselves against any potentially tyrannical government. In this regard, they established the Second Amendment in the Bill of Rights granting people “the right to bear arms.”

Since then, firearms and their supporting culture have been encoded into the very DNA of U.S.-American identity and what it means to be “an American.” But what may have been “reasonable” in the 18th century, without substantial reform, ranks as unreasonable today.

The Chinese in 1232 of the Common Era invented a powdery mixture of sulfur, charcoal and potassium nitrate that when ignited with a spark, created an explosion. Though they deployed this chemical concoction for beneficial effects for their citizens, the Chinese also utilized it for defensive and offensive advantages in wars against internal and cross-border enemies.

The Chinese first stuffed gunpowder into tubes to which they tied a fuse and lighted it, propelling it as a hand-held rocket aimed at adversaries. Thus, gun power transformed the “art” and scale of killing into the likes of which the world had never seen. Throughout the decades and centuries to come in countries across the planet, the technology created more and even deadlier types of “hand cannons” as they were once called.

Attributed to the Portuguese in the 1400s, the “matchlock mechanism” was added to become the first known mechanically-firing gun. They attached a wick to a clamp that when triggered, sprang into the gun power. The Spanish carried these with them on their invasions into the Americas, and the Pilgrims brought them from England when they arrived in what would become known as North America.

Christopher Columbus took with him matchlocks and other types of hand cannons and breech-loading wrought-iron weapons and arquebuses, an early type of portable firearm supported on a tripod or a forked rest. When he sailed from Haiti, he ordered shots fired through the shipwrecked hull of the Santa Maria to frighten indigenous populations with the power of European firearms.

European inventors in 1509 replaced wicks with friction-wheel mechanisms to create the wheellock guns. These generated sparks to ignite the gunpowder. Later, as would become common in Colonial America, residents used flintlock guns invented around 1630 with flint-ignition mechanisms.

The Long Rifle (also known as the “Kentucky Rifle” or “Pennsylvania Rifle”) developed with spiral grooves giving iron balls a spiraling motion, which improved each shot’s overall stability and accuracy. Combatants used these firearms as major weaponry during the so-called French and Indian War as well as in the American Revolutionary War.

At the end of the 16th century in Germany and other European countries, firearms technicians came up with a “wheel gun” (revolver) that included a revolving cylinder containing several chambers and at least one barrel for firing. Now shooters no longer had to reload following each shot but could unload up to six bullets at their intended targets. In the U.S., Samuel Colt in 1836 mass produced these multi-shot guns, popularly called “six shooters.”

By the 1850s, shot guns (also referred to as scatterguns) became popular. Usually fired from the shoulder, they use a single-fixed shell to fire numerous small spherical pellets (called “shot”) or a solid projectile (called a “slug.”) Today, these firearms range from single action to semi- and fully-automatic.

The Union forces in 1862 popularized the Gatling gun, developed by Richard Gatling, as a weapon of mass destruction. This rapid-fire gun was the forerunner of the machine gun. And then, the Cartridge Revolver, developed by Colt in 1872, was a .44-caliber rear loading weapon.

And the technology with its capacity to injure, mutilate, dismember and kill rapidly evolves with each passing day.

If Leif Erikson, the first known European to set foot on North America, had been born after rather than before the development of gun powder, there is little doubt that he would have brought firearms to those shores.

Comparing and Contrasting gun violence in the U.S. and abroad

Before and up to 1996, Australia had relatively high rates of murder, but a tragic incident at Port Arthur, Tasmania on April 28, 1996, was the proverbial straw that broke the poor camel’s back. On that date, a man opened fire on a group of tourists killing 35 and wounding another 23. The massacre was the worst mass murder in Australia’s history.

Taking decisive action, newly-elected conservative Prime Minister John Howard negotiated a bipartisan deal between national, state and local governments in enacting comprehensive gun safety measures which included a massive buyback of more than 600,000 semi-automatic rifles and shotguns as well as laws prohibiting private firearms sales, mandatory registration by owners of all weapons and the requirement that all potential buyers of guns at the time of purchase give a “genuine reason” other than general or overarching self-defense without documentation of necessity.

By 1996, polls showed overwhelming public support of approximately 90% for the new measures. And though firearms-related injuries and death have not totally come to an end, according to The Washington Post, homicides by firearms fell by 59% between 1995 and 2006 with no corresponding increase in non-firearm-related homicides. There was also a 65% reduction in gun-related suicides.

Other studies found significant drops in robberies involving firearms. And contrary to fears by some, there has been no increase in the overall number of home invasions. In the decade preceding the Port Arthur massacre, Australia recorded 11 mass shootings. No mass shooting have occurred since the measures went into effect.

The U.S. Congress enacted a brief federal ban on assault weapons, The Public Safety and Recreational Firearms Use Protection Act, in September 1994. The ban, which also included barring high-capacity magazines, expired in September 2004 as required in its 10-year sunset provision. The measure has not since been reauthorized by Congress.

As a provision inserted as a rider into the 1996 federal government omnibus spending bill, the Dickey Amendment, named after Arkansas Republican Representative Jay Dickey and lobbied heavily by the National Rifle Association, passed into law. It mandated that “none of the funds made available for injury prevention and control at the Centers for Disease Control and Prevention (CDC) may be used to advocate or promote gun control.”

Considering these restrictions and the “right to bear arms” in our constitution, what limits on the national, state, and local levels should we as a nation consider and enact upon the sale and ownership of firearms?

Many people within the larger Gun Safety Movement have proposed “common sense” solutions. Unfortunately, what one person considers “common sense,” another personal considers as “freedom killing.”

How free, though, are any of us when an estimated 11,000+ people are murdered annually, and another 22,000+ lose their lives through gun-related accidents or suicides? How free are we when the guns lobby purchases our politicians in the service of firearms manufacturers in their quest to acquire even more power and profits?

With the relatively easy access to firearms in the United States, few of us have not already been touched by the ravages of gun violence. Hardly a day goes by that we hear of yet another high visibility mass shooting, which doesn’t even begin to reflect the seemingly countless number of lives taken in small towns and large cities throughout the nation that never make it to the national spotlight.

What will it take for us to cease fighting insanity with insanity? How many more of our precious people of all ages will have their lives cut short under the banner of the “freedom to bear arms”?

What will it take for us to reverse the unholy alliance between corporate America and powerful pressure groups controlling politicians in the service of firearms manufacturers?