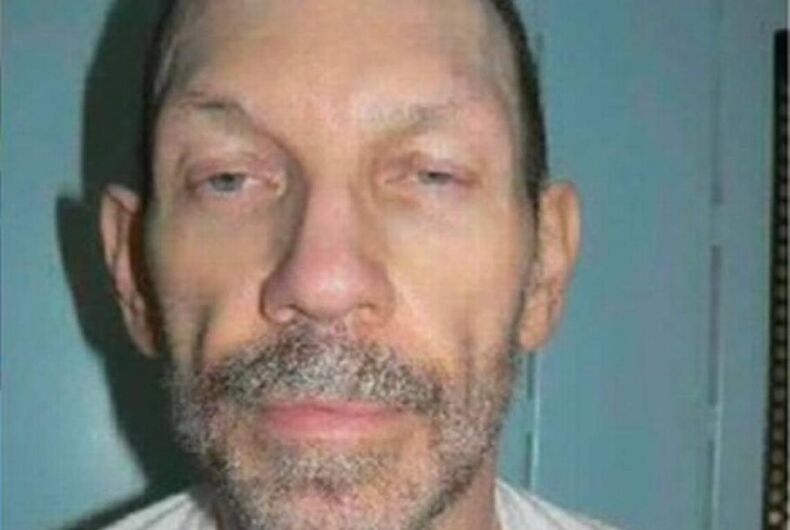 For the second time, the U.S. Supreme Court dismissed an appeal from a death row inmate who claims jurors sentenced him to die because he is gay.

In 1993, Charles Rhines was sentenced to capital punishment for murdering Donnivan Schaeffer—an employee at Dig Em Donuts in Rapid City, South Dakota—while robbing the store. But more than two decades later, jurors came forward with new information claiming that bias against Rhines’ sexual orientation played a role in deciding whether he should spend life in prison or be sentenced to death.

In 2016, Frances Cersosimo—a member of the jury that convicted Rhines—claimed in a sworn statement the defendant’s sexuality played a major part of the deliberations. According to Cersosimo, an unidentified member of the panel claimed jurors would be “sending him where he wants to go” if they voted for life in prison without parole.

Other jurors asked if Rhines would be permitted to “mix with the general inmate population” if he were sentenced to prison. They were concerned he might “brag about his crime” to entice “young men,” according to jury notes from the time.

Civil rights groups claim these statements were unconstitutional and urged the Supreme Court to weigh in as to whether jury testimony could be unsealed. In a 2018 friend of the court brief, the American Civil Liberties Union cited the bench’s ruling in Peña-Rodriguez v. Colorado, in which SCOTUS claimed the “no-impeachment rule”—which bars jurors from later testifying about the verdict—does not apply in instances where racial bias tainted the decision-making process.

RELATED: Did a jury give a gay man the death penalty because prison would be ‘too much fun?’

David Cole, national legal director for the ACLU, has argued the same standard should apply to Rhines’ case.

The South Dakota Attorney General’s office disagrees with that claim.

However, the Supreme Court will not be weighing in on that debate. On Monday, SCOTUS declined consideration of Rhines’ case—meaning that his death penalty conviction will stand.

As is customary, the bench did not state its reasoning for refusing to weigh whether the lower court ruling was constitutional. This is the second time the court has declined to hear his appeal.

Despite Ravnsborg’s assertion that sexual orientation and race don’t hold the same weight in jury deliberations, there’s significant evidence that anti-gay bias is a major problem in the U.S. court system.

In a 2009 study from The Jury Expert, data compiled from 7,800 mock jurors over a six-year period found that 45 percent felt homosexuality is “not an acceptable lifestyle.” Fifty-percent said same-sex couples should not be permitted to wed, while 45 percent believed queer people “could change their sexual orientation” if they wished to do so.

In a study of 950 jury transcripts, Heather Pruss, a criminology professor at Bellarmine University, concluded that jurors are not impartial when it comes to the queer identity of defendants accused of wrongdoing.

“If there is a potential homosexuality component to the case, this is something that is on the minds of jurors,” she wrote in a 2014 report.

Nonetheless, the South Dakota Attorney General continues to assert that anti-gay prejudice played a role in the jury’s decision to opt for a death penalty charge in Rhines’ case. In a brief to the Supreme Court, Ravnsborg says the gruesome details of the crime are the sole reason the jury was compelled to sentence him to death.

“Rhines locked Donnivan’s head between his knees and pounded a hunting knife into the base of Donnivan’s skull, partially severing his brain stem,” he says of the 1992 robbery, noting that Rhines swiped french fries before leaving the scene.

According to Ravnsborg, Rhines cackled during his “bloodcurdling confession,” comparing the victim’s death to “a beheaded chicken running around a barnyard.”

Rhines’ legal team has not stated whether they plan to file further appeals in the case.