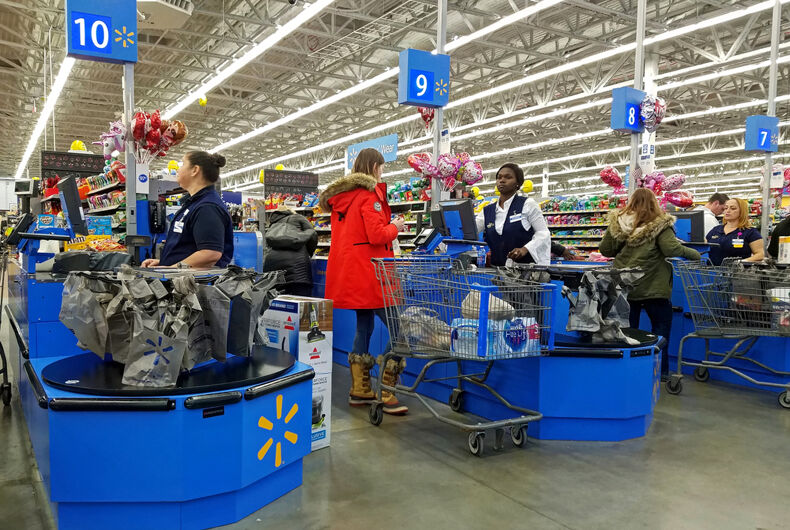 An anti-LGBTQ group reportedly will be meeting with Walmart after misrepresenting backlash to the company’s gay-inclusive dating ad.

Monica Cole, director of One Million Moms, claims the organization requested an audience with Walmart President and CEO Doug McMillon after it began circulating petitions claiming that a video featuring two gay men shopping for pans at one of its stores “normalizes homosexual relationships.”

“It’s clear that Walmart is on the path of elevating homosexual relationships to the same level as the male-female model of marriage,” claimed One Million Moms after that ad aired in February as part of a Valentine’s Day promotion.

While McMillion did not agree to meet with the group, Cole claims One Million Moms was “offered a meeting with his representative and that meeting has now been set for later this month.” The parties will be joined by the American Family Association (AFA), which One Million Moms describes in a statement as its “parent ministry.”

RELATED: Walmart made a cute ad about a gay couple dating at a store. The right is outraged.

Cole plans to interrogate Walmart as to the company’s stance on LGBTQ issues.

“The appearance here is that Walmart, Inc. has joined the LGBT movement. Is this true or false?” she plans to ask McMillion’s representative. “Are you aware that Walmart has only commented on the positive posts on the ad but has completely ignored hundreds expressing objections? Does this mean Walmart does not care about those who have objections and have been offended?”

But while One Million Moms maintains that “thousands of families… have been offended by the gay-affirming ad,” what the statement declines to mention is that anti-LGBTQ groups purposefully misled the public as to how many people actually opposed the ad.

To date, over 186,000 individuals have allegedly signed onto a pair of petitions from One Million Moms and AFA accusing Walmart of endorsing the “cultural revolution and [rejecting] the beliefs of its customer base.”

However, prior investigation into the signature gathering tactics utilized by these groups has shown the numbers are likely inflated. In March, this journalist reported that individuals who wished to sign the petition were able to do so dozens of times from the same IP address, even the same web browser.

While the online form builder Wufoo allows petitioners to put safeguards in place to ensure their campaigns don’t attract spam bots and fake signatures, One Million Moms and AFA declined to opt into those security measures.

The bar for signing the petition was so low that typing in random gibberish in the name and email prompts was still accepted as a valid entry.

This wouldn’t be the first time that One Million Moms and AFA have falsified its campaign numbers or allowed its petitions to be easily compromised. When the groups led a boycott of Target’s trans-inclusive bathroom policies, The Daily Beast and ThinkProgress debunked claims that more than a million people had joined the campaign.

ThinkProgress was able to sign the petition to boycott Target using the names ‘I disagree With this,’ ‘I really think this is stupid,’ and ‘This isn’t A real email.’

“All that it required was using a different email address each time,” reporter Zack Ford said. “As the last name suggests, it was also possible to sign the pledge using a gmail.com address that does not even exist.

According to The Daily Beast, One Million Moms and the AFA could have fixed this problem but chose not to. As journalist Samantha Allen claimed, the anti-LGBTQ lobbyists “could have easily forced each signer to complete a CAPTCHA test in order to lend more credibility to its signature count.”

“They didn’t,” she reported. “It would have only required a few clicks.”

When asked about the potential for its petitions to be spammed with fake signatures, a representative for One Million Moms and AFA claimed the organizations had “no further comment” as of early March.

Even those its figures are likely falsified, media publications have continued to treat petitions from One Million Moms and the AFA as legitimate. When ABC News and The Washington Post reported on the Target boycott, each outlet parroted claims the petitions had garnered hundreds of thousands of signatures without skepticism.

This time around, their questionable methods earned One Million Moms and the AFA an audience with one of the largest corporations in the world. LGBTQ Nation has reached out to Walmart for comment and will update this story should its representatives respond.

On the company’s media relations page, it asks reporters to check a CAPTCHA confirming they are “not a robot.”