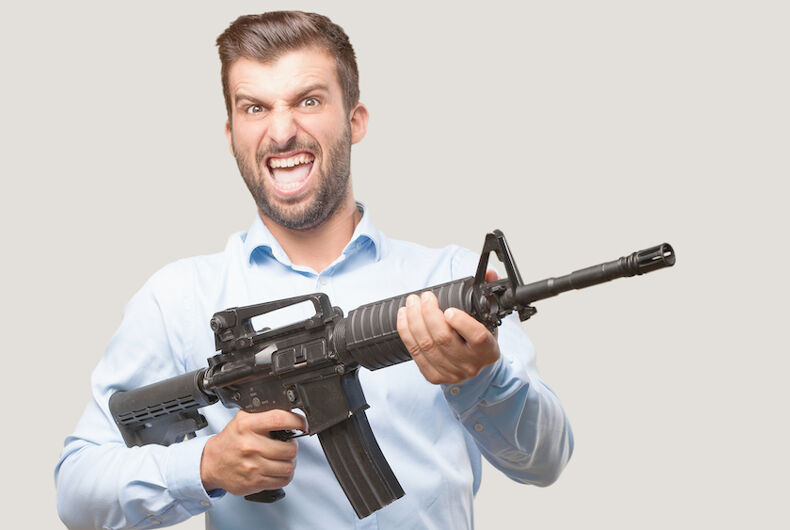 The New Yorker just published a blistering exposé of corruption at the National Rifle Association (NRA), the nation’s largest gun manufacturer lobby whose sole raison d’etre is to derail conversations about firearm regulation. The remarkably homophobic organization now faces annual deficits of up to $40 million following years of financial mismanagement and overspending on its PR company, Ackerman McQueen.

The magazine reports that:

federal tax forms, charity records, contracts, corporate filings, and internal communications — a small group of NRA executives, contractors, and venders has extracted hundreds of millions of dollars from the nonprofit’s budget, through gratuitous payments, sweetheart deals and opaque financial arrangements. Memos created by a senior NRA employee describe a workplace distinguished by secrecy, self-dealing and greed, whose leaders have encouraged disastrous business ventures and questionable partnerships, and have marginalized those who object.

Mark Owens, a former IRS head, said that these revelations could cause the NRA to lose its tax exempt charity status, without which it would surely die.

A quarter of the NRA’s staff is “now managed by former employees” of Ackerman, creating a financial conflict of interest as the PR group now accounts for 12% of the NRA’s annual expenses.

The NRA also pays out huge salaries to its senior leadership, sometimes under questionable circumstances: Tyler Schropp, a man whose job is to fundraise off of wealthy NRA members, has a salary of over $620,000 a year. Wayne Sheets, an NRA consultant, got paid $710,000 in 2017 and received $240,000 in “expense reimbursements” even though many lacked documentation. Mike Marcellin, a senior employee, received $630,000 after only working a few weeks in early January. Josh Powell, a “senior [legal] strategist” who is not a lawyer, got over $800,000. The NRA’s president Wayne LaPierre gets more than $1 million annually.

In order to cut costs, the NRA “eliminated free coffee and water coolers at its headquarters and has frozen its employees’ pension plan.” It also now regularly begs its members for money, frequently mentioning financial ruin and the importance of protecting 2nd Amendment rights.

This report should be of interest to the LGBTQ community considering the NRA’s long history of queerphobia. In 2016, NRA’s chief lobbyist Chris Cox called trans identity “twisted, perverted … wrong, backwards, and abnormal” at the NRA’s national meeting. In 2014, NRA board member Ken Blackwell said that the root cause of mass shootings is marriage equality — he has also compared gay marriage to incest and blamed gay people for “creating” AIDS. The group once fired a legal firm for refusing to defend the anti-gay Defense of Marriage Act (DOMA).

A 2018 New York state court filing by the NRA said the organization may soon “be unable to exist… or pursue its advocacy mission” because of insurers cutting off their financial dealings with the group.