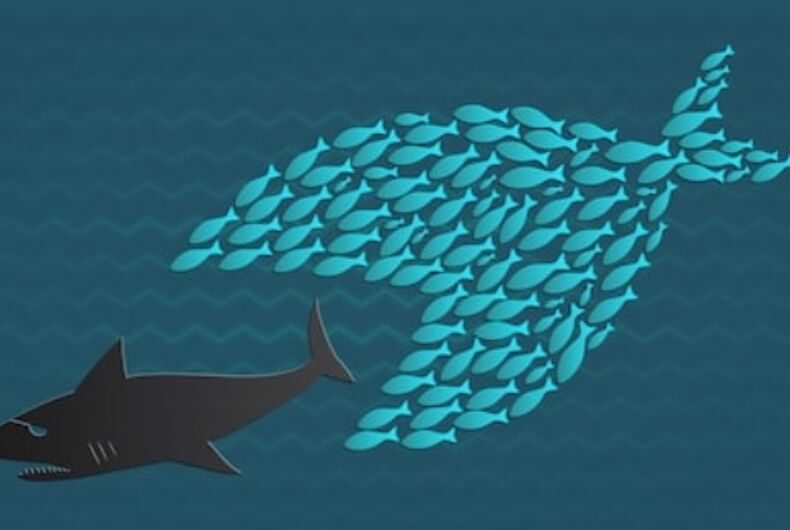 Not the meme in question.Photo: Shutterstock

Swimming through my mind is a meme symbolizing the political, economic, religious, and social inequalities of our times with a path forward.

The meme comprises reverse images where on the upper half, a gigantic monster fish propels open-mouth engulfing smaller fish who attempt to escape from being consumed. The lower half shows the smaller fish joining together e pluribus unum chasing and ultimately defeating the gigantic fish who once seemed so overwhelmingly powerful.

I understand the gigantic fish as representing the system of patriarchal white supremacy, a system that uses the strategy of fear and division to maintain and extend its power and control.

Actions used and words expressed by those consciously or inadvertently advancing the patriarchal white supremacist system are many. Expect the gigantic fish to feed hardily when we hear some of its warning signals:

· “illegal aliens” are coming to take away jobs from African Americans and working-class people;

· we must build “strong, beautiful” walls;

· most Muslims are terrorists and want to impose Sharia Law;

· people of color are violent and less intelligent;

· women lack the emotional temperament to be leaders, and by demanding to control their own bodies, they are destroying social norms and sinning against God;

· trans women are “men in dresses” who want to rape “real” women in bathrooms and destroy military coherence;

· marriage for same-sex couples cheapens “traditional” marriage, and they “recruit” the young into their perverted “lifestyle”;

· the young must be seen and not heard and listen to their elders;

· seniors must make way for those “in their prime”;

· the U.S. was established and intended as a “Christian” nation;

· the U.S. is a true meritocracy, and anyone who wants to advance can do so, and if they don’t, they can only blame themselves;

· an unregulated “free market” system is a fair system for all;

· we must choose between a clean environment or a secure job market;

· healthcare for all would place the U.S. in the category of “European socialism,” which destroys personal responsibility and incentive;

· there are the makers and the takers,

…and so many other “divide and conquer” tropes too numerable to list.

Donald Trump has dedicated his entire life in erecting walls to divide and conquer, to “win” for himself at any cost to his now non-existent sense of dignity, integrity, and empathy.

Trump’s statements, policies, and actions, coupled with his cabinet and other staff appointees has resulted in furthering the already deep skid marks across the landscape, and a historic collective fracture of divisions and anxiety on the body politic.

Trump has excited the worst in the human psyche. But Trump has merely served as a tool – a toxic elixir – that has revealed the iceberg of the largely submerged resentment and fear of the “other.” By his example, he has given others permission to reveal their own xenophobic beliefs with strength and even with pride.

Trump could be placed into the category of “Machiavellian” in his singlemindedness, cunning, plotting, and unscrupulous – sometimes vicious – actions in advancing his power and fortune and enacting his policies. To him, the ends certainly justify the means no matter who gets hurt.

Returning to our fish meme, the bottom figure depicts coalition politics that will ultimately lessen and end the many systems of oppression against us all. This is an important way forward.

And by the way, no Donald, most Democrats don’t hate Jews. But this Jew says stop fomenting hate and division. It will very soon come back to bite and devour you.