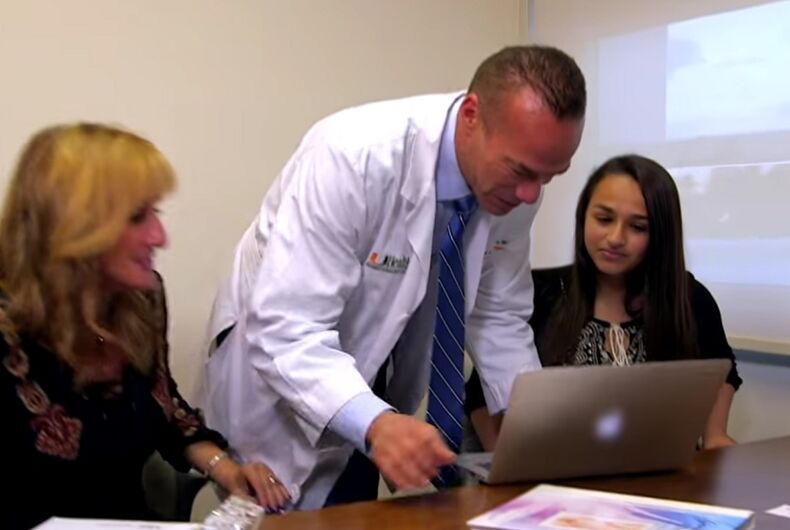 Jazz Jennings and her mother consulting with Christopher Salgado in 2017.Photo: YouTube/TLC

A surgeon who posted images of transgender people during gender affirmation surgeries to Instagram is now saying that his account was hacked.

Christopher Salgado, a surgeon who was formerly with the University of Miami, has been a cosmetic surgeon for over two decades and has done gender affirmation surgery for many transgender people.

For the past several months, Salgado posted alarming pictures and videos to his now-deleted Instagram account. Some of the pictures were taken during surgery, often of transgender patients. The pictures and videos were posted with dismissive and at times transphobic, sexist, racist, and homophobic hashtags.

In one of the pictures, he arranged the interior of a patient’s penis into a heart and captioned it “There are many ways to show your LOVE.” He posted that on Valentine’s Day with the hashtag #whatthefuckisthat.

Related: Jazz Jennings had a heart-breaking response to a Duggar’s insults

Salgado told the AP that he obtained consent from the patients to post pictures and videos of their surgeries to Instagram and said that the posts were intended to be “educational.”

“I apologize to any person for hurting their feelings as this began as educational,” he wrote in an email.

“I have dedicated the past nine years to the care of this patient population and will not let this detract from my love for them.”

But he said that the hashtags on his account were the work of a hacker.

“I had never seen in my life” the hashtags, Salgado told the AP.

When he emailed his resignation to his department chair in February, he claimed that his account was hacked. The department chair responded that their investigation into the matter had just started so they could not determine whether this was true.

He also said that he was not fired from his job, but that he resigned. The University of Miami was unable to confirm because it does not comment on what it calls “the detailed status of employees.”

Salgado appeared on an episode of I Am Jazz in 2017, a reality show about Jazz Jennings, a transgender teen from Florida. He was one of the surgeons she consulted with about bottom surgery, and he showed her pictures of his work.

She ultimately went with a different surgeon.

Trump wants to divide us. But like fish, we need to unite against oppression.