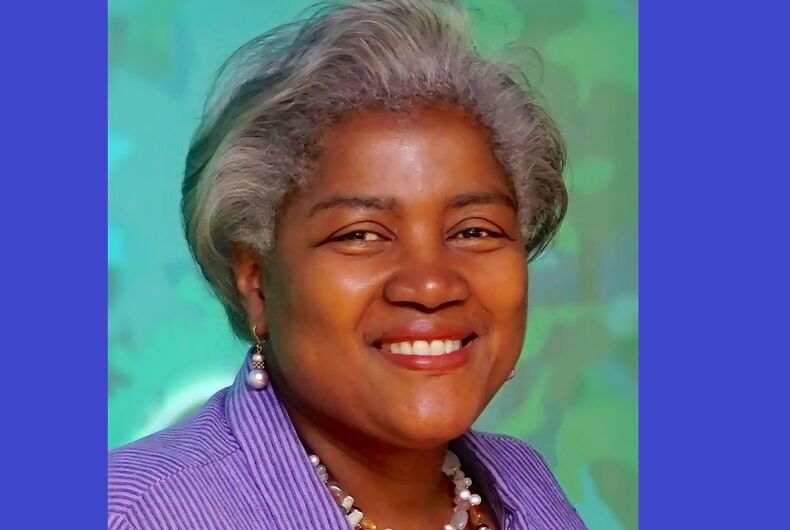 Brazile at the Kaiser Permanente Center for Total Health in 2014.Photo: Wikipedia/Todd Eytan

Donna Brazile signed a contract with Fox News, where she will appear regularly to offer political analysis.

Brazile is a long-time Democratic strategist. She led Al Gore’s 2000 presidential campaign and was the chair of the Democratic National Committee until early 2017.

In 2016, she was working as an analyst for CNN, when a Wikileaks email dump showed that she had given several debate questions to the Clinton campaign. She lost her job with CNN and, in her book, admitted to sending the emails in question.

Liberals were not happy to see her working for Fox News now, which they see as a Republican propaganda network.

Donna Brazile watched Fox "news" destroy Al Gore when he ran for president in 2000. She was his campaign manager. Fox accused him of everything from petty insults to huge scandals, and it was a factor in his "loss." Going to work for them now is just bullshit. https://t.co/IYPE5uItoG

I have no idea why you would do this. You are simply lending the appearance of objectivity to a propaganda network. You are being used as part of the propaganda. No one watching that network will listen to you, and the network will use you as "proof" that they are not liars.

Of course Donna Brazile is going to Fox. That’s how she rolls. She has a very lucrative hustle. pic.twitter.com/GaUeSOj0QV

Brazile responded with a statement, where she said that she’s just trying to reach a new audience.

“There’s an audience on Fox News that doesn’t hear enough from Democrats,” the statement says.

“We have to engage that audience and show Americans of every stripe what we stand for rather than retreat into our ‘safe spaces’ where we simply agree with each other. For there is no safety in self-limiting numbers.”

Fox News condemned her statement and her show now appears to be canceled.

Conservatives are now mad that a Democrat was hired shortly after a conservative may have been fired, although Brazile will be working in a different capacity than Pirro did.

Fox News decided to suspend Judge Jeanine and hire Donna Brazile in the same week. If that doesn't show you the direction Fox News is headed I don't know what will…

Two weeks ago, the DNC Chair said they were not going to give #FoxNews a 2020 DNC primary. Since then…

So Fox News managed to make everyone mad, because their viewers don’t seem to appreciate the value of Fox News at least maintaining the semblance of being a real news organization.

It's rare, in this time of extreme division, to do something that will piss literally everybody off. Anyway, Donna Brazile is joining Fox.

A drag queen was performing when a toddler asked if she’d do his favorite song. Then magic happened.