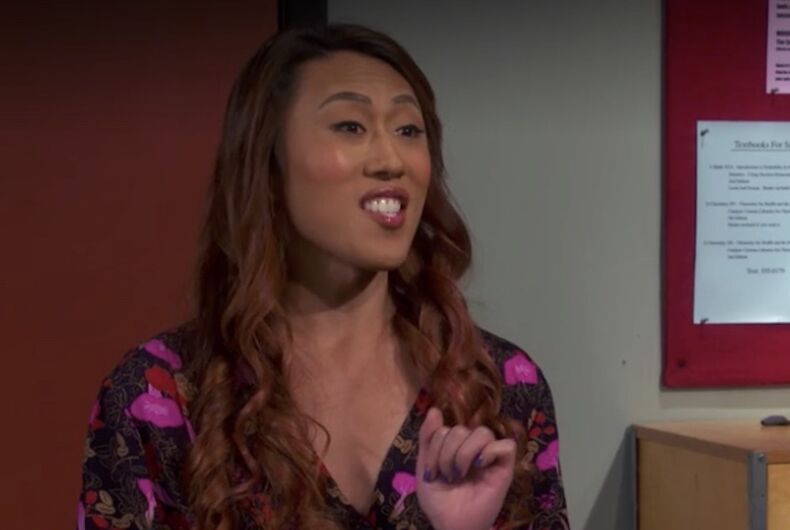 Last week, Netflix released the third season of One Day at a Time, a sitcom about a Cuban-American family with a lesbian daughter and her non-binary significant other. Among the show’s funny ensemble cast, eagle-eyed viewers might’ve spotted Nicky Endres, a self-described “non-binary transfeminine, genderqueer, and genderfluid” martial artist and actress from South Korea.

Endres plays Cynthia, a joke-cracking member of a women’s therapy group attended by Penelope, the show’s matriarch. While Cynthia never openly identifies as queer, the show embraces its queer characters and deals directly with issues of queerphobia, coming out and raising a lesbian daughter.

Endres has played many male roles credited as Nick Endres on the sitcom Don’t Trust the B— in Apartment 23 and other series and films. Endres’ personal website says they use both female and gender neutral pronouns and that “Nicky will still play male roles so long as she doesn’t have to cut her hair.”

Here is Endres’ acting reel in which they play both male and female roles:

One Day at a Time is a modern-day remake of Norman Lear’s 1975–1984 sitcom of the same name. In the original series, a divorced mother raises two daughters in Indianapolis. In the modern remake, she raises her daughter and younger son in Echo Park, Los Angeles. She also lives with her elderly mother.

After its first season, One Day at a Time was listed numerous times as one of the best TV shows of 2017 and was also nominated for a GLAAD Media Award for Outstanding Comedy Series.