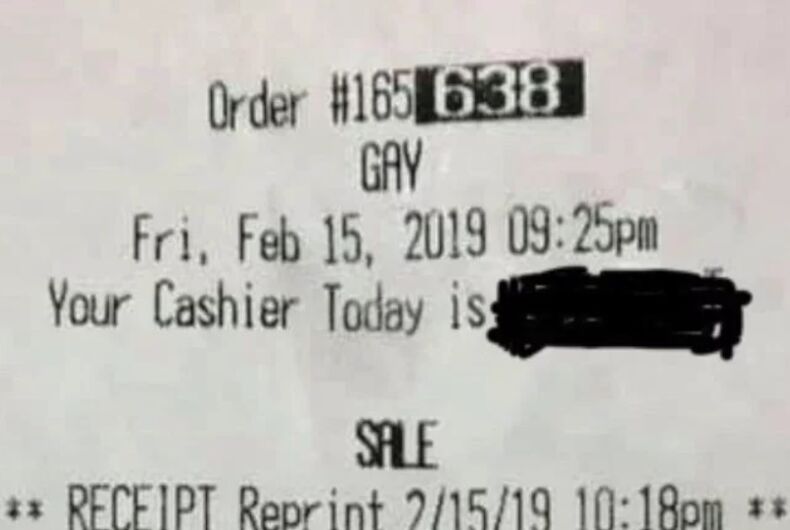 Two customers at a Little Caesar’s in Virginia didn’t just get Crazy Bread with their order, they got a side of homophobia.

Rosman Harris and his cousin, Marcus Robertson, went to Little Caesar’s this past Friday and ordered several pizzas. They said that other customers were asked for a name to go with their order, but they weren’t.

When they returned 15 minutes later to pick up their order, Harris noticed that the name on the receipt was “GAY.”

“It was this preconceived notion of, ‘Oh, these are gay men.’ So, why would you write that on the ticket? I’m not understanding that,” Harris told WTVR.

The manager wouldn’t tell them why their receipt said that.

On Sunday, another cousin went to the store and the cashier was working there. He asked her why she wrote “GAY” on the receipt, and she blamed Robertson for talking too loud.

“So, my cousin was, like, ‘No, he wasn’t being loud or rude. He’s hearing impaired, so when he talked loud that’s for him to hear himself speak,'” Robertson said.

On Monday, they found out that the employee had been fired.

In a statement, Little Caesar’s corporate office called it a “violation of professional conduct.”

“This is a highly unusual, isolated situation at a store locally owned and operated by a franchisee,” the statement said.

“The franchise owner took immediate action to investigate this matter and has terminated the employment of the individual involved in the incident.”

But the cousins say they never even got an apology.

“Because for something like this to happen, not only does it impact your business, it impacts your image as well,” said Robertson.

Trump denied a trans woman asylum & deported her. She was killed when she returned.