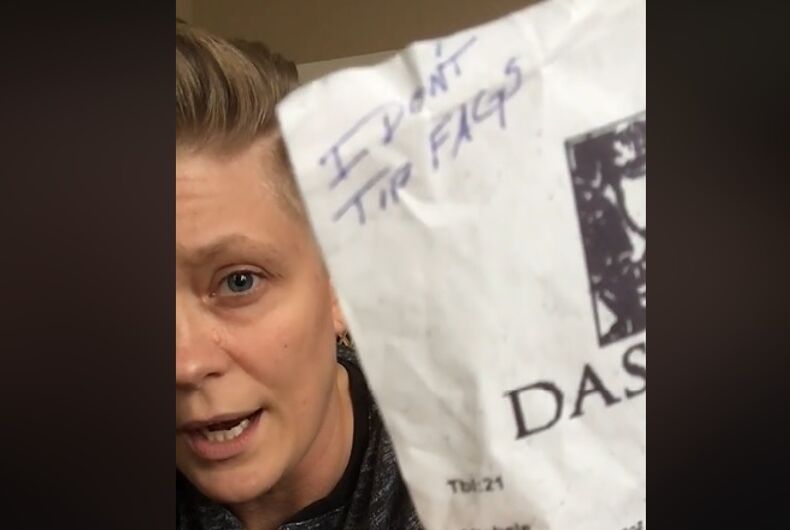 A video from a waitress who was called a “fag” by a customer has gone viral.

In a Facebook video, she said that she was working the lunch shift this past Tuesday when two men came into the restaurant. They weren’t friendly and ate quickly, but she didn’t think much of it.

She left them the check, and when she went to pick it up she found a message written on the receipt: “I DON’T TIP FAGS.”

The customer didn’t pay in cash, a point Crider brings up in the video and says, “You knew what you were doing.”

Crider said that the men don’t know her, that she’s a single mother and she is supported by her coworkers, who bought her flowers after they saw what those customers did.

“Try to understand what it is you’re saying: I’m not a fag, I’m a dyke,” she concludes.

You know… I just hope this message gets back to this guy. You sir are a sad excuse for a human.

Crider told WPTA that she has received support from all over the country because of that video.

“I started receiving messages from people from somebody from Alaska and somebody from Arizona, and they’re just saying ‘You’re so inspirational. I love that you turned a negative thing into a positive,’” Crider said.

And her boss said that people have been leaving her gifts at the restaurant.

Trump doesn’t know about his global initiative to decriminalize homosexuality