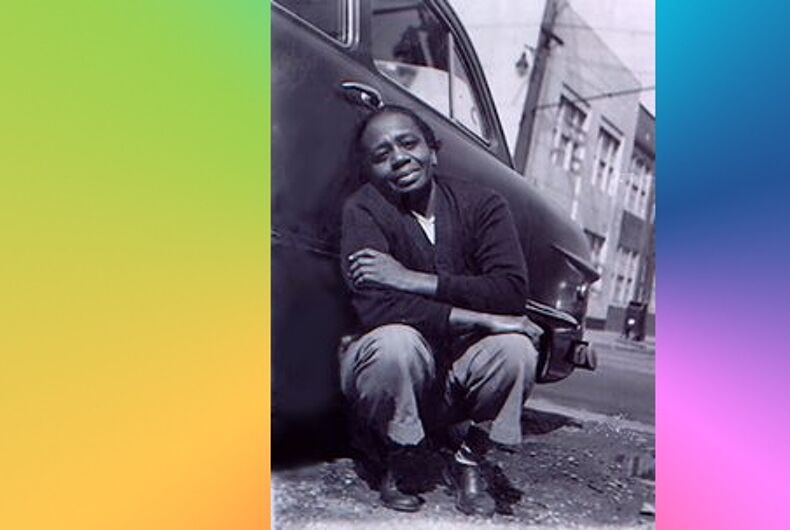 At the age of 101, Ruth Ellis was an out lesbian activist and a living, breathing reservoir of African-American LGBTQ history. She was also the oldest known living lesbian in America.

Ruth Charlotte Ellis was born in Springfield, Illinois, on July 23, 1899, on the cusp of a new century. The Emancipation Proclamation was ratified 34 years before, but just three years earlier the Supreme Court’s ruling in Plessy v. Ferguson legitimized state laws requiring racial segregation.

Though she grew up in an integrated neighborhood, Ellis’ family experienced discrimination that barred them from restaurants, theaters, and other public facilities.

Ellis’ father, Charlie, was a self-educated man who had been born a slave but ended up becoming the first African American mail carrier in Illinois. Her mother, Caroline, died when Ellis was just 12 years old. Ellis later told the lesbian magazine Curve, “My mother died just about the time I started menstruating, so she showed me that, but from then on nobody told me anything.”

At age 16, Ellis realized she was attracted to her high school gym teacher. She grew up with no lesbian role models, and little in the way of sex education. Her father brought home a book on sex education and laid it on his desk.

“Once my dad brought me a book. It told about women, different parts of their body, and all like that,” Ellis said. “He didn’t tell me he’d bought that book. He just laid it on his desk. He knew I’d be meddlesome and look in to read it. When he thought I’d seen enough of it, why, the book disappeared. So that’s how I learned.”

Ellis never had to come out, as she never felt the need to hide her sexual orientation from her father or her brothers. She often had girlfriends over and, as she told one interviewer, “Nothing ever happened.”

“Except one night I had this girlfriend stay, and we made a little too much noise. The only thing my father ever said to me was, ‘Next time you girls make that much noise, I will put you both out.'”

One of Ellis’ girlfriends was Ceciline “Babe” Franklin, who was ten years her junior. The women would remain together for more than 30 years. In 1937, Ellis and Franklin moved to Detroit, Michigan, where Franklin worked as a cook while Ellis first started taking care of children, and later got a job in a print shop.

“I was working for a printer, and I said to myself if I can do this for him, how come I can’t do it for myself?”

Using money from an inheritance, Ellis started a print shop in a front room of her house, producing stationery, fliers, and posters. She was the first woman in Michigan to have her own printing business. At the time, African American women owned less than one percent of the businesses in Detroit.

From the 1940s to the 1960s, Ellis and Franklin’s home became a gathering spot for the African American LGBTQ community, which had few social venues. People gathered to sing, dance, and play cards. Ellis also became a source of support for those in need, and was known to buy books and food for young people, and even help with college tuition.

Ellis and Franklin separated amicably in the 1960s. Franklin moved out to be closer to her work, and Ellis moved into a senior center.

Less than a week after her 70th birthday, the riots at the Stonewall Inn shook the country and launched the modern LGBTQ rights movement. The sudden surge in community and visibility made Ellis something of a community celebrity. She was often invited to speak at national events and became a fixture at the Michigan Womyn’s Music Festival.

In 1999, on her 100th birthday, Ellis led San Francisco’s dyke march, where thousands of women sang “Happy Birthday” to her, at the first of many celebrations over that month. She would live to see her 101st birthday before quietly passing away in her sleep, but not before dedicating the Ruth Ellis Center in Detroit, a social services agency caring for homeless, runaway and at-risk LGBT youth.

After her passing, Ellis’ remains were cremated and spread in special places at the Womyn’s Festival. Some of her ashes crossed the ocean and were spread in the sea in Ghana. Ellis’ life spanned three centuries, 101 years of change for black, LGBT people and women.

This man is under investigation for attacking a trans woman. He just beat a black man.