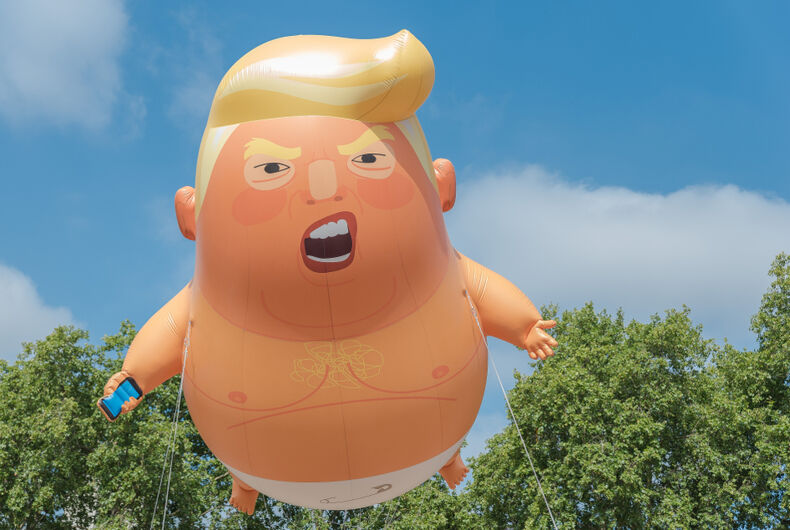 A balloon of "baby Trump" floats over London on 7/13/18.Photo: Shutterstock

Franklin Delano Roosevelt perfected what would become known as “fireside chats” when he spoke directly to the public in their homes over the medium of radio.

During his presidency, Roosevelt gave a series of 30 chats lasting between 13 and 44 minutes that covered genuine financial and national security crises facing the country. He proposed solutions and attempted to stop rumors that may have been circulating to reassure a tense nation in desperate times of economic uncertainty and political upheaval.

Eight days into his term, FDR broadcast his first fireside chat as President to quell speculation over the spate of bankruptcies in the financial sector. He presented his plans for easing the crisis by closing remaining banks on March 6.

In advance of our entry into World War II, this president updated the country on the state of the war.

Franklin Roosevelt mastered the art of communication. He spoke with authority, intelligence, compassion, and genuine empathy to fearful and angry residents who individually and collectively faced existential calamities rarely experienced on such a grand scale.

And while his broadcasts invariably were “political” in nature in his call for expanded powers of the federal government, and his proposals reflected the partisan politics of the era, he used the technique of the presidential address to close the partisan divide and bring the country closer together.

My relatives who were alive during those times related how Roosevelt seemed to emanate from the radio like a trusted friend and how he seemed to talk with them individually with warmth and comfort.

That was then, but this is now. Donald Trump is certainly not Franklin Delano Roosevelt!

Roosevelt served through times of real crises. And while Trump has the authority and power to confront genuine crises facing the nation, Trump chooses instead to manufacture faux crises for his own political gain.

In his first televised primetime national address to the nation, Trump chose to focus on a crisis of his own making – an unpopular and ineffective physical barrier on our southern border.

The four major TV networks decided to air Trump’s address. Placed into context, these same networks have a mixed record of broadcasting prepared remarks from the White House on immigration issues, which they considered “political” speeches.

While networks preempted their primetime programing to allow President George W. Bush in 2006 to present his immigration address to a national audience, they failed to do the same with President Barack Obama’s speech on immigration in 2014.

Make no mistake: Trump’s stilted reading from a teleprompter did not center on an actual crisis, but was based, instead, on a foundation of lies. Terrorists, drug traffickers, rapists, and criminals are not flooding across our border with Mexico; “90% of heroin” in our country does not “come across the southern border”; “thousands of people” in the U.S. are not killed “by illegal aliens” who “rape and murder for pleasure.”

Trump perpetuated this scam to pull in supporters throughout his run to the White House, and in his desperate attempts to stave off the blue wave in the midterm elections.

Trump is the humanitarian and national security crisis. He enthusiastically follows the first law of Joseph Goebbels, Nazi Reich Minister for Propaganda and Public Education: “If you tell a lie big enough and keep repeating it, people will eventually come to believe it.”

He has distorted the term “immigrant” into a dirty word, an epithet he uses to incite fear and rage in his electorate. He equates “immigrant” with rape, violent crime, and infestation.

Trump’s lies have serious consequences as alerted by philosopher Voltaire, who said, “Those who can make you believe absurdities can make you commit atrocities.”

We have witnessed the beginning of the most visible of the atrocities: family separation and children placed in cages as if they were dangerous diseased animals; the incarceration of people fleeing gang violence and abject poverty into gruesome detention centers; the deportation of parents before they are reunited with their children.

Trump has used his manufactured “humanitarian and national security crisis” to justify his partial closing of government, using 800,000 federal employees as political pawns while denying them paychecks – even the ones who are forced to continue working during the shutdown.

The real crisis seriously affecting our nation is the crisis of confidence and credibility related to the character, temperament, and qualifications of Trump to serve in the most responsible and powerful leadership position on the planet.