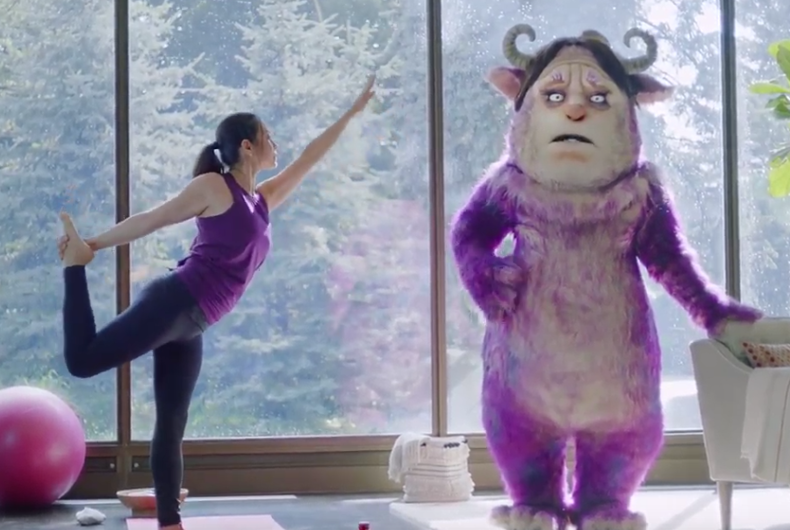 A woman does yoga while her "worry monster" watches in a new POM commercial targeted by the religious rightPhoto: Screenshot

One Million Moms, the group of significantly-less-than-a-million pearlclutchers who serve as a front group for a bunch of white old men, is back with their latest manufactured outrage. This time it’s a doozy.

They’re targeting pomegranate juice – because a woman is doing yoga in the commercial.

“As if that isn’t disgusting enough, the description the company posted on YouTube reads: ‘Julie got healthy and started drinking POM Wonderful. Now her Worry Monster’s worried about what’s gotten into her’,” Cole clucks.

“POM should be ashamed! When this type of commercial airs too early in the evening, family viewing time is ruined. Can you imagine what goes through the mind of a child when they see this ad? We all know children repeat what they hear. There is nothing funny about kids mimicking this behavior.”

In a frenzy of moral outrage, Cole wrapped her screed with a warning to the fruit juice maker.

“It is extremely destructive and damaging to impressionable children viewing the commercial. POM may push away customers if they continue advertising in a repulsive manner that offends parents. POM needs to know parents do not approve!”

One Million Mom’s nonstop antics have made it the laughingstock of the religious right groups, but this may be a new low for them. Companies that they have previously targeted have not suffered any consequences from Cole’s online histrionics.

Did these 11-year-old ‘girlfriends’ die of suicide after being bullied by classmates?