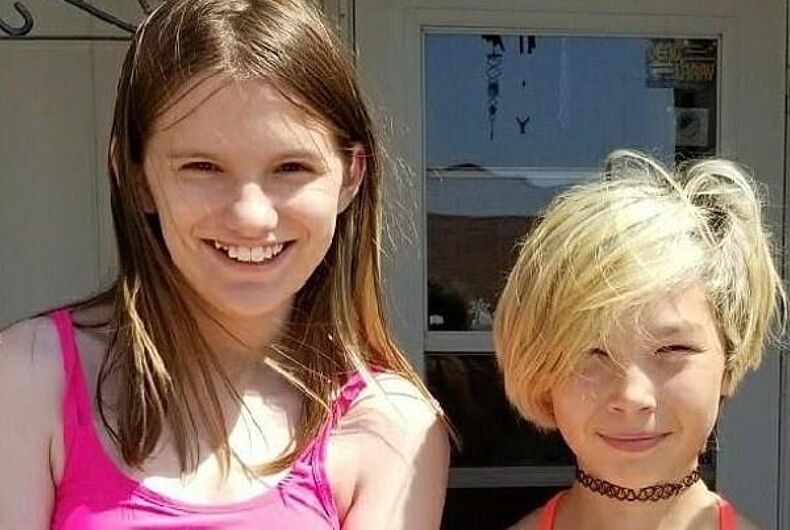 The parents of two 11-year-old girls are speaking out after they say classmates drove the two to suicide because they were girlfriends.

Their parents, Angela Leaf and Shane Paulsen, shared with the Daily Mail that the pair had been bullied at their middle school after they started calling each other “girlfriends.” They say they were only alerted to the harassment after both girls had died.

“I didn’t know there was a problem until I woke up to a gunshot on December 2,” Paulson said. “I thought I had a healthy, happy child. Madissen was excellent in school, As and Bs. She won the American Citizenship Award.”

“I’m trying to work through where it went wrong. I still live in the same apartment where she killed herself so I don’t go home often.”

Paulson says he destroyed the gun his daughter used to die of suicide.

The girls met in fifth grade and instantly bonded, their parents say.

“They followed each other,” Leaf said. “When Sophia cut her hair, shortly after that Madissen did too.”

Both Paulson and Leaf say their daughters confided in them that they were questioning their sexuality and had feeling for the other girl.

“She asked if I was ”grossed out” and I told her I would be a big hypocrite [if I did] because my sister is my best friend and she’s bisexual. I told her there’s no way I’m going to judge her because she’s my daughter.”

‘If she and Madissen had those feelings, I would never have any issues with it,” she added. “It’s part of life and I love my daughter one way or the other, no matter what.”

“Madissen, Sophia and I were in a Burger King and my daughter points at Sophia and says, ”This is my girlfriend and there’s nothing you can do about it dad.’,” Paulson said. “I joked with them, ”Well, you guys aren’t sleeping in the same room tonight.” They were 11, how do they even know what love is yet? They were best friends.”

“My daughter questioned her identity but it didn’t matter to me if she was in love with girls or in love with boys.”

“These children are fragile and want to be accepted so badly. When their friends turn against them, it’s a real battle for them to shrug it off. They carry that weight,” he said. “If some of her friends had spoken to me, her death may have been prevented.”

After Madissen died, Leaf says Sophia took it hard and was diagnosed with Disruptive Mood Dysregulation Disorder – a childhood condition of extreme irritability, anger and intense temper outbursts. She was in therapy to deal with the trauma when she died, but neither her mother or her medical providers were concerned she was suicidal.

They say the school hasn’t been helpful or considerate as they work through their grief.

“I think they just want it all to go away. It isn’t the kind of publicity a school wants – two kids in the same grade, two months apart commit suicide and bullying could have been a huge issue,” Paulson said. “There’s a real problem in that school and I can say it boldly, because I know that bullying goes on and people look the other way.”

Scott Privratsky, the school superintendent, was contacted for the story but only replied, “The school district will not comment.”