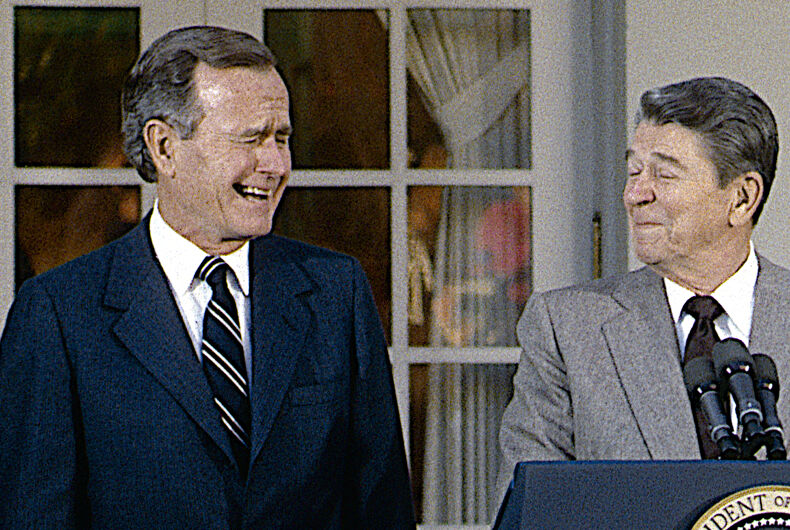 Recently, with the passing of former President George H. W. Bush, many people, including preeminent historians, remember him fondly and are virtually rushing to commit him to sainthood. Many of us, though, remember him very differently, especially those who demonstrated throughout the Reagan-Bush years for their reprehensible behavior in failing to mount an appropriate response to the HIV/AIDS pandemic.

By a margin of ten-to-three, the Boston City Council passed a resolution on July 29, 1992 denouncing President George H. W. Bush’s policy of barring visitors with HIV/AIDS from entering the United States. The Council then apologized to the world for the “international embarrassment of the United States Immigration policy.”

The resolution followed the VIII International Conference on AIDS—the pre-eminent international gathering scheduled for the Hynes Convention Center in Boston. In protest of Bush’s HIV travel ban, it was relocated to Amsterdam by the Harvard AIDS Institute and the International AIDS Society.

The ban ran counter to established World Health Organization and International Red Cross guidelines. It was even opposed by Bush’s own Public Health Service.

Earlier, in a highly publicized incident, Bush’s federal immigration officials enforced the restrictive policy in April 1989. Hans Paul Verhoef, a Dutch citizen and AIDS educator, was taken into custody by US federal officials in Minneapolis during a stopover en route to the National Gay and Lesbian Health Conference in San Francisco. Verhoef was held at the state penitentiary after officials learned of his AIDS diagnosis, but an international outcry led to his release and his being granted a limited travel waiver.

Following the conference’s relocation, I phoned Duke Austin, Public Affairs Officer for the US Immigration and Naturalization Service, for that agency’s response.

What surprised me more than Austin’s actual words was how candid he was about the President’s biases and his ignorance.

According to Dr. Max Essex, then chair of the Harvard AIDS Institute, “These restrictions simply have no public health justification whatsoever,” he said. “HIV is not casually contagious; it’s reprehensible that ten years into the epidemic, US policy is being driven by such ignorant, homophobic and xenophobic attitudes.”

Bush’s reaction to the conference’s change of venue: “It doesn’t bother me much.”

To be sure, it didn’t bother him. George H. W. Bush consistently demonstrated, by word and (in)action, that he just didn’t care.

And he didn’t care about preserving basic human and civil liberties for people with HIV and AIDS. In short, Bush’s AIDS policies were misguided, mean spirited, and morally reprehensible for this supposed “kinder and gentler” president.

The US House Select Committee on Children, Youth, and Families in its 1992 report, “A Decade of Denial: Teens and AIDS in America,” concluded: “Denial of the problem at the federal level—where leadership should be paramount—is a national disgrace.”

“Workers on the front lines are struggling heroically to cope with illness and death, but their tools have been too few, their resources too constrained, and their logistics too crippled by the sabotage of disbelief, prejudice, ignorance, and fear….In the past decade [under Reagan and Bush], the White House has rarely broken its silence on the topic of AIDS.”

I traveled with my compatriots of ACT UP (AIDS Coalition to Unleash Power) Boston and other chapters throughout the east coast to Kennebunkport, Maine, the vacation retreat of Bush and his family, and to the National Institutes of Health in Bethesda, Maryland to protest the Bush administration’s criminal inaction on AIDS.

Some people, however, defended George H. W. Bush by arguing that AIDS spending grew under his administration. The reality is that Bush was dragged kicking and screaming to address the crisis by the Congress, which consistently increased somewhat Bush’s (and Reagan’s before him) AIDS funding proposals.

The number of people with HIV/AIDS increased nearly three-fold under the Bush administration (from approximately 84,000 in January 1989 to over 230,000 as of July 1, 1992), while funding continually and dangerously lagged.

Though the overall number of HIV-related deaths was then currently lower than for cancer or heart disease, by 1993, AIDS was expected to overtake all other causes of death and illness in people under age 65.

To place the national AIDS budget then into perspective, in one year, 1991, for example, the AIDS budget was smaller than money set aside for the space station “Freedom.”

The Bush administration attempted to pit health constituency groups against one another by insisting that spending for AIDS took funding away from other important medical and social programs. But money spent on AIDS paid dividends on revealing the secrets of many other diseases that attack the human body.

As we began to crack the HIV code, we began unlocking long-held mysteries about the human immune system. In turn, this better enabled researchers to understand the broader areas of disease and the workings of the body.

Advancement in AIDS translated into advancements in biomedicine and genetics, and gave new impetus to research other areas of human sexuality and drug dependency.

Related: Bush should’ve been jailed rather than canonized on LGBTQ and HIV issues

Subsequently, researchers and activists rejected the politics of division by refusing to compete for a small piece of a limited pie. Instead, AIDS activists, drug treatment activists, breast and cervical cancer activists, Alzheimer’s activists, hemophilia activists, proponents of universal health care, and others joined together to demand a substantially larger pie. Identity politics transformed into ideology coalition politics.

As we look back through the lens of history to examine George H. W. Bush’s presidency, and particularly his stands on HIV/AIDS, it becomes abundantly clear that what AIDS activists warned, “Silence = Death,” was, as it is now: poignantly and tragically true.

During the 1992 campaign for Democratic Vice President, Al Core traveled the country and asked his audiences his now famous question, “What time is it?”

Many of us felt deeply that if this country was to defeat the plague in our midst, only one answer was possible. “It’s time for George H. W. Bush and his inhumane and disastrous AIDS policies to go.”