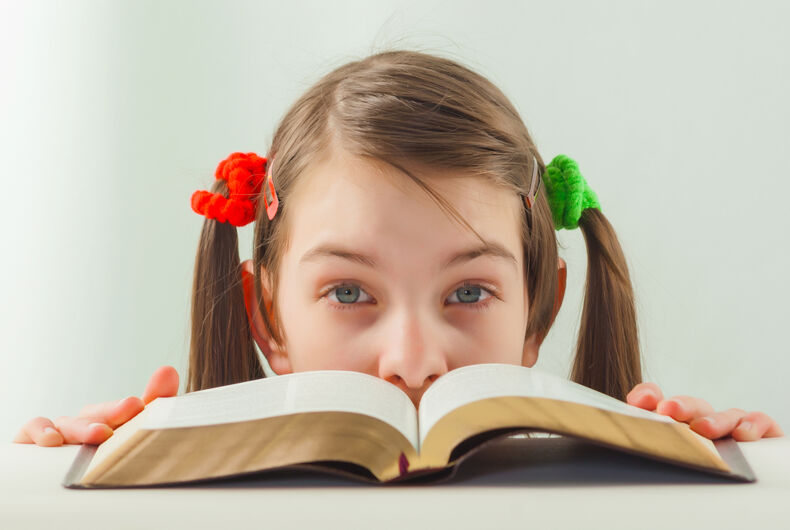 North Dakota State Representative Aaron McWilliams has introduced a bill that would require high schools to teach a Bible class instead of the required semester of civics. The law would not distinguish between teaching the course as “literature” or religious studies.

The bill is seen as a gift to evangelical Christians who have attempted to use similar laws to push anti-LGBTQ, misogynistic, and xenophobic religious teachings to children.

Since the measure is patently unconstitutional, McWilliams ran to FOX News to defend his position.

During the interview, McWilliams claimed that our “system of judges” and “the concept of forgiveness” come from the Bible. Studying the book would teach the kids morality, he says, as if other religions (or the lack of religious faith) are immoral.

Fox guest and NC state legislator defends a bill he co-sponsored to allow Bible classes in public school: “There’s a separation of church and state but there’s not a separation of books from education” pic.twitter.com/6IZ753B3hb

And since McWilliams appeared on FOX News, he caught the eye of President Donald Trump who had to rush to Twitter to give it the (tiny) thumbs up.

In true Trump fashion, despite his constant pandering to his evangelical base and regular “prayer gatherings” and meetings with far right religious leaders, he continues to demonstrate his ignorance of what’s actually in the book.

Adultery, disobedience to authority, ignoring judicial rulings, working on the Sabbath, and perjury are all Biblical “crimes.” The prescribed penalty is death.

One of Trump’s largest group of supporters, the Southern Baptists, are supporters of the death penalty. They say it should be used when there is “clear and overwhelming evidence of guilt.”

Yes, he would literally be teaching the kids that he’s such an awful person he should be put down like a rabid dog. After all, there is “overwhelming evidence of guilt.” He’s admitted to it all.