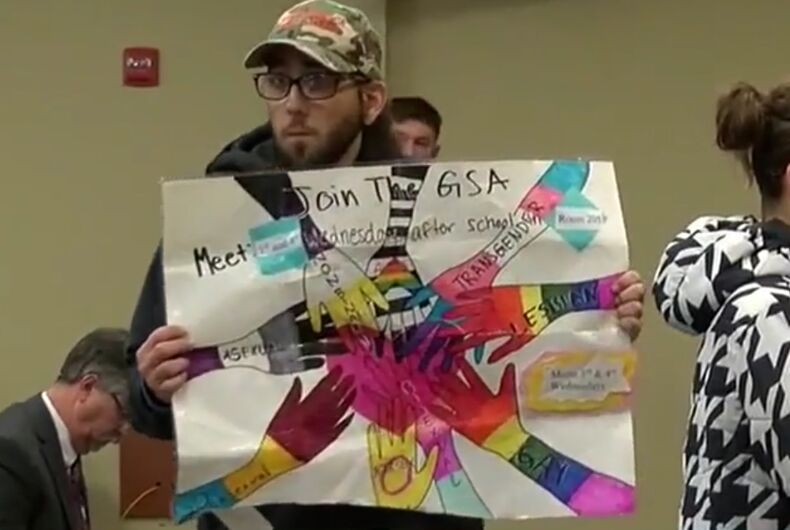 A dad ran away from school officials with a stolen LGBTQ poster and accused the school of breaking the law by displaying it.

Ken Allen’s daughter Summer is a student at Smithton Middle School in Columbia, Missouri. He found out about the school’s Gay-Straight Alliance (GSA) from his daughter and he called their posters “verbal sexual harassment.”

“He was giving me information about how that’s verbal sexual harassment, and it’s against the law for them to be doing that,” Summer told ABC 17 News.

One day, when Allen was at the school for a parent-teacher conference, he stole one of the posters “in a fit of rage.” The poster shows a bunch of hands coming together, with words on them like “lesbian” and “transgender.”

Allen said that school administrators chased him as he left the school with the stolen poster.

Related: Christian parents sue for ‘religious freedom right’ to know if their kid joins a GSA

He then appeared at a meeting of the Columbia Board of Education to complain about the posters this past Monday, claiming they violate state law that requires schools to notify parents with the content of human sexuality instruction.

“I think that parents that want to have this conversation with their children should, in the home,” Allen said.

“I think that just like certain other topics, such as religion and Christianity, that perhaps the school, in and of itself, should not be the proper place for this conversation,” he added.

The school said that the poster is a promoting an extracurricular activity, so it is not covered by the state’s sexual education law.

Earlier this year, another middle school in the same district removed some of their GSA’s posters that highlighted famous LGBTQ people.