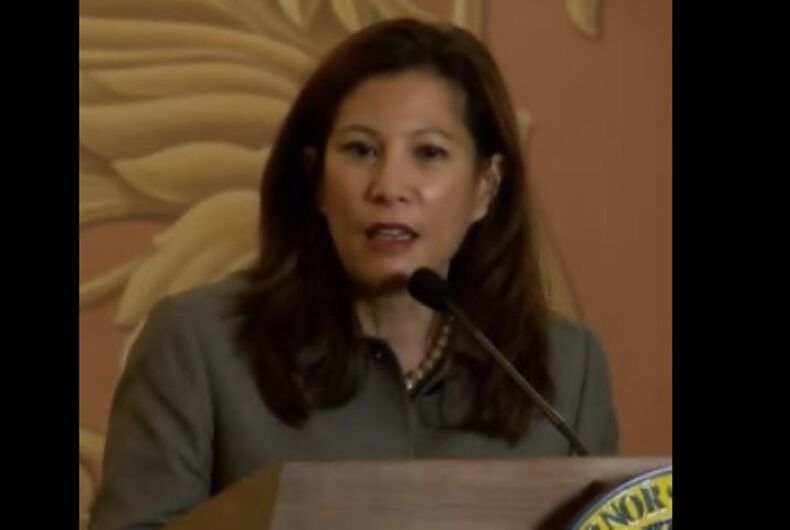 The chief justice of the California Supreme Court is no longer a registered Republican, citing Brett Kavanaugh’s confirmation to the Supreme Court as the reason.

Tani Cantil-Sakauye was appointed to the position in 2010 by then-governor Arnold Schwarzenegger (R). Even though a Republican governor appointed her, she is now registered as a no-party-preference voter.

In a phone interview, Cantil-Sakauye said that she has become increasingly uncomfortable with the state and national GOP, and that the confirmation hearings for Kavanaugh were the last straw.

When asked by CALMatters what was the specific problem with the Kavanaugh hearings, she said, “You can draw your own conclusions.”

Kavanaugh was accused of sexual assault by several women after Donald Trump nominated him to the U.S. Supreme Court earlier this year.

One of the accusers, Christine Blasey Ford, testified before the Senate, and many prominent Republicans attacked her. Trump himself said that her accusation was an “assault” on him carried out by “radical left wing politicians.”

“I’ve been thinking about it for some time,” Cantil-Sakauye, who is the first Filipina-American to lead a state supreme Court and the second woman to be the Chief Justice of California’s Supreme Court, said.

Last year, she sent a pointed letter to Attorney General Jeff Sessions telling him to stop “stalking undocumented immigrants” and arresting them in courthouses.

“Enforcement policies that include stalking courthouses and arresting undocumented immigrants, the vast majority of whom pose no risk to public safety, are neither safe nor fair,” she wrote.

Last week she also made comments about state legislation that could use the judiciary’s budget to influence judges’ decisions.

“I don’t believe the attacks are going to stop. I do not believe the undermining and marginalizing of the branch will ever stop. And it is people’s right to speak up,” she said.

Cantil-Sakauye said she talked about leaving the GOP with people close to her, who told her, “You didn’t leave the party. The party left you.”

“I felt compelled to make a choice now,” she said. “It better suits what I do and how I approach issues.”

Is Barbie about to make a same-sex wedding doll set?