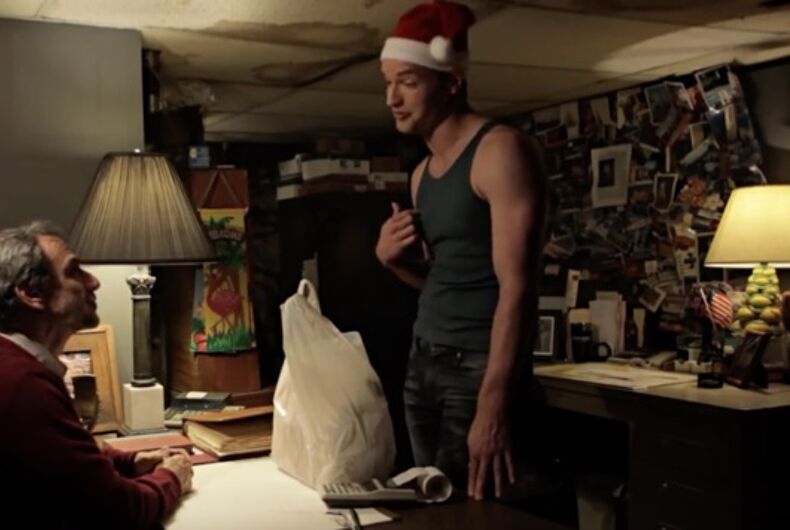 A scene from the LGBTQ-themed "Scrooge & Marley" Christmas movie.Photo: Screenshot

We’re hip-deep in the holidays, so what better time to pull our favorite classics off the shelves and give them a spin?

Of course, while you’re spinning your Meet Me in St. Louis DVD for the 500th time, or streaming White Christmas on Netflix, you might have the yearning for a more LGBTQ-themed storyline.

Don’t worry: we have you covered with this list of 10 films.

The downside? You’ll often find our stories placed second in the blow list, as sometimes wacky subplots and the like. You’ll also find that the majority of these are very gay male-oriented. Until Hallmark calls up Jamie Clayton and Laverne Cox for their own holiday special, there’s not a lot that is trans centric, nor does it seem there’s a lot out there that is even lesbian or bi focused among holiday offerings.

What’s more, not all of these saw a theatrical release, with many being seasonal television fare or made for TV movies. That said, let’s get on with the list!

The aptly-named character who fronts this film, played by Pulp Fiction and Mission Impossible actor Ving Rhames, is a drag queen who helps out a drug-addicted single mom and her daughter. It’s a tearjerker and maybe a bit preachy at times, but until Hallmark gives us a holiday special of our own, this may be the movie to fit the bill.

Too Cool for Christmas – Theatrical Trailer from Here TV on Vimeo.

Focusing on a pair of Mean Girls-esque teens, this made for TV movie courtesy of LGBTQ-focused HereTV includes the first same-sex parents on the list and features George Hamilton as Santa Claus. Be forewarned, however: a renamed and re-edited version of this movie, titled A Very Cool Christmas, replaced one of her dads with a mom!

A typical but fun family romp, The Family Stone features a secondary story involving a gay member of the family who, along with his partner, is considering adopting a child. While some of the family moments might be just what you’d expect in such a movie, it’s still a good watch. It features Sex in the City‘s Sarah Jessica Parker and Diane Keaton, too.

It just wouldn’t be the holidays without a version of A Christmas Carol — and this one takes a gay twist, telling the story of as a miserly piano bar owner who is visited by the usual host of spirits to guide him to altruism.  Its co-writer, Richard Knight Jr., was inspired by The Family Stone, above, to make a gay-centric holiday film — and this is it.

It’s another coming home for Christmas movie, this time featuring a son coming home and going into the closet to survive the holidays with his parents — all the while juggling his relationship with his partner. You’ll find all the usual hijinks in this one, including the folks trying to set him up with a woman and his partner showing up unannounced for the holidays. Don’t worry, it all resolves delightfully!

About as close as we seem to have to a lesbian holiday film, Carol is a period drama set around Christmas in 1952, where two women – played by Cate Blanchett and Rooney Mara — fall in love within a backdrop of mid-century homophobia. It may not be the feel-good family fare of the others on the list, but it remains a powerful, challenging movie well worth taking a moment to watch.

Diane Keaton makes her second appearance on the list, but again finds herself outside of the gay storyline of a holiday-focused family comedy.

In Love the Coopers, we follow the story of Officer Percy Williams, played by Anthony Mackie. A closeted police officer who is busy trying to help all the other characters out and Marisa Tomei as a “life coach” who helps the officer focus on his  own needs as a gay man.

The real downside? It’s a bit syrupy — but that comes with the holiday territory!

A direct to video film featuring two young men who fall in love during a holiday weekend that doubles as wedding planning one of the men’s sister. It includes a lot of the usual misadventures, but without the usual wacky “coming out during the holidays” misadventures of so many other holiday films. This one might be a little harder to find, but well worth keeping an eye out for.

A “will he or won’t he” story with a holiday twist as the leading men get engaged, only for one to break the engagement during the holidays. Set against a backdrop of Montana in winter, it’s a sweet dramatic comedy that has more sentiment than wacky family hijinks and is one of the more refreshing holiday movies on the list.

Call it a palette cleanser. Paul Reubens is Pee-wee Herman in a very special holiday edition of Pee-wee’s playhouse. It’s as campy as always and features a special guest lineup of old favorites such as Cher, K.D. Lang, Grace Jones, Zsa Zsa Gabor, and even Joan Rivers.

Here’s hoping this list has given you some ideas for your holiday viewing, and may we see even more in the new year!

Another prominent Republican just quit the party in disgust