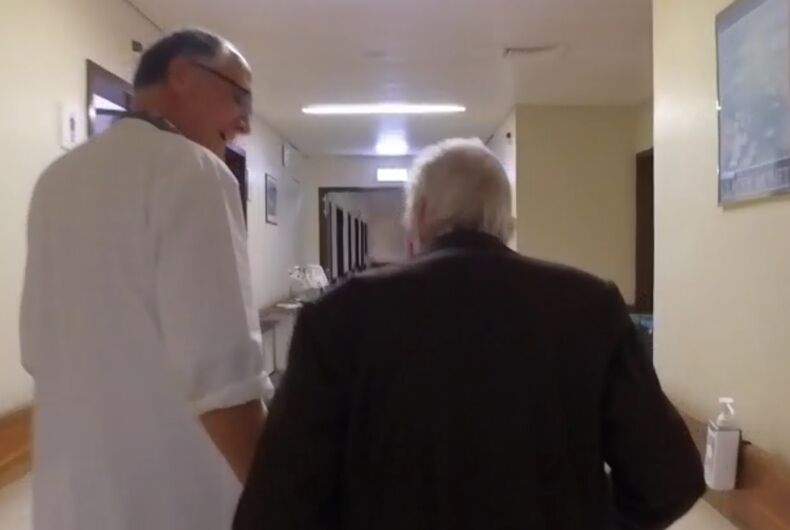 Dubbed “The Lisbon Patient” in a soon-to-be-published case study, the oldest person to be diagnosed with HIV will turn 100-years-old this coming spring. He has been living with the virus for at least 25 years.

The man, called “Miguel” in the paper to protect his anonymity, is healthy. His only signs of less-than-perfect health are his use of a can and some loss of hearing and vision. None of these, of course, are uncommon for a 100-year-old.

Miguel was diagnosed in 2004, after he went to a hospital in Lisbon, Portugal. At the time, he was suffering from colitis and lymphoma, and had a greatly suppressed white blood cell count.

Doctors soon found the cause: AIDS. They sprang into action.

He was initially treated with chemotherapy, then moved to a heavy combination of antiretroviral drugs to help fight back his infection. His primary physician, Dr. Henrique Santos, was unsure back then if he could be saved.

Related: A woman with HIV died in a lake. Now a village is draining its only source of water.

Today, Miguel is much stronger, with an undetectable viral load and replenished white blood cell count.

“I still feel well enough that I don’t bother other people that much,” Miguel said to CTV News. “I feel fit enough, too, to take care of all my routines, to get dressed, to put my shoes on, to go to bed. I do all of that at home alone.”

According to the Joint United Nations Program on HIV-AIDS (UNAID), some 36.9 million people had HIV worldwide as of 2017, with 1.8 million new cases happening within that year. Infections among children are declining, but 45% of all new cases are in people aged 40 or over.

Stories like Miguel’s give hope to those facing HIV and also show the importance of getting proper care. Miguel’s doctors say that the key to Miguel’s health has been how faithful he remains to the antiretroviral medication he takes as well as other healthy habits he practices.

Miguel, however, will tell you that his longevity is thanks to much simpler reasons.

“The reason why I have reached such a long age is because every day when I go to bed, I make a cup of lemon tea,” he said. “The good slice of lemon with the rind and the pulp and everything. It would boil for five minutes and in the end,  I would add a good teaspoon of honey.”

The best things to happen to LGBTQ people in 2018

When this sailor kissed his husband, conservatives erupted in anger