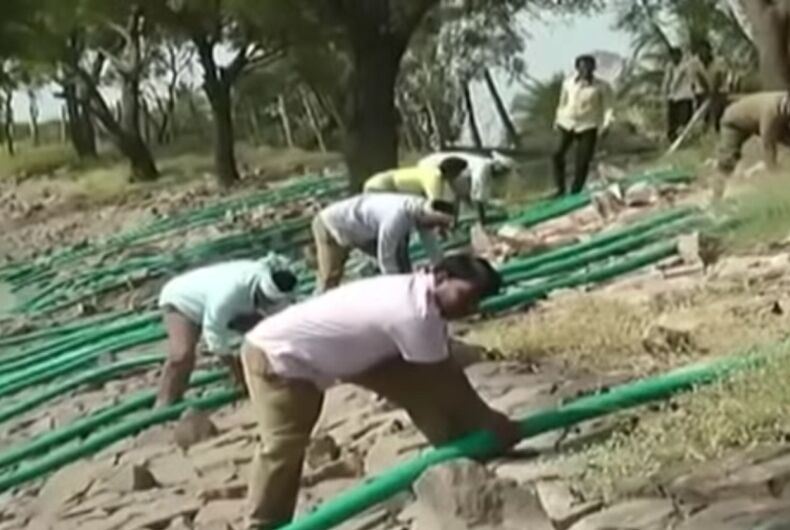 Residents of a village in India are draining their only source of water after an woman living with HIV drowned herself in it.

The people of Morab in southwestern India have refused to drink from the local lake since the woman died in it.

Authorities attempted to convince them that HIV cannot be transmitted by water and that there’s no risk of getting the virus by drinking the water.

The lake is the only source of drinking water in the area and the source of water for irrigation.

Related: Over half of gay men aren’t comfortable kissing an HIV+ person

“We found the body in a highly decomposed state,” said resident Muttan Bhavaikatti. “We don’t want to consume contaminated water. We are trekking 2-3km to fetch water from the Malaprabha right bank canal that flows through Morab.”

“We would have consumed the water if it was the body of a normal person, but the woman died of HIV,” another person told Times of India, even though the woman didn’t die of HIV but of suicide.

But that failed, so they have installed 20 pipes and four motors to suck the water out of the 36-acre lake. They’re hoping to refill it with water from a canal, a process that could take one to two weeks.

“It’s sheer ignorance stemming from lack of awareness,” said Dr. Glory Alexander of the Asha Foundation. “When an HIV-positive person dies, the virus also dies. Even if the virus comes out of the body, it cannot survive in water and dies in a couple of seconds.”

“There is no risk of infection spreading from the water.”

Republicans found an easy way around their midterm losses: cheat