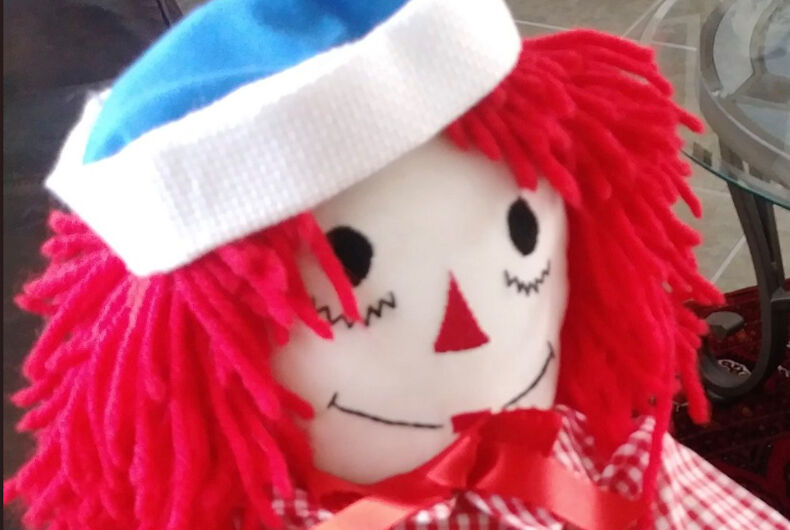 The grandmother of Gabe – a 22-year old transmasculine person known as @Snepblep on Twitter – won the holidays this year, affirming their love for Gabe in the most epic way.

When he was younger, his grandmother gave him a Raggedy Ann doll, complete with the classic skirt and even his birth name in a heart on the doll’s chest.

Raggedy Ann and Raggedy Andy were created in the early years of the 20th Century and have remained a common, often handmade, doll. They typically have a heart embroidered on their chests.

Before Christmas, Gabe’s grandmother asked to borrow that old Raggedy Ann doll. Then, for the holiday, gave it back.

So when I was a kid I, I had a raggedy Ann doll given to me by my grandmother. It had my birth name embroidered into a heart on it's chest.

This Christmas my Grandmother borrowed it and gave it back, now with pants, shorter hair, and my new name sewn in place. Hes trans, like me pic.twitter.com/KpMAnd1In8

But the doll had changed. Gone was the skirt, replaced with the familiar blue pants of a Raggedy Andy doll. A sailor hat now resided on a shorter haircut, and – across its heart – the words, “I Love Gabe.”

He received a number of other gender affirming gifts from his grandmother, including a pocketknife engraved with his name, and a “sick” T-shirt that reads “I’m Gabe Doing Gabe Things.” He says he’s never taking it off.

Other name-based gifts I got from my grandmother include: an engraved pocketknife, and this sick t-shirt I'm never taking off pic.twitter.com/Hy4wZBNyZK

His post about his new doll went viral, picking up 9500 likes and 16,000 retweets within 24 hours. The responses have shown an outpouring of love for Gabe and his grandmother.

Someone is chopping hella onions in here. Your grandmother is a gem!

This might be the sweetest thing I've seen all Christmas, please cherish your grandmother, there are others in this world without grandmother's who care this much! Give her a hug from all of us on the internet!!

Hug your granny from me. Omg I already love her pic.twitter.com/7MtgqWrvqk

Watch a drag performer transform into a fabulous tree

What if James Bond were played by a trans woman?