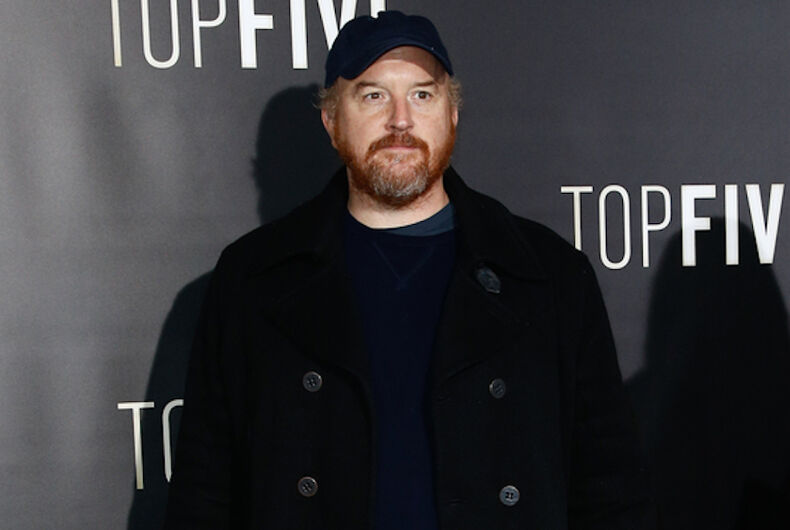 Following his November 2017 admission of sexual misconduct by exposing himself in front of at least five women, comedian Louis C.K. had resurfaced with a standup routine using anti-gay slurs and mocking both non-binary people and survivors of the February 2018 Stoneman Douglas High School shooting in Parkland, Florida.

In one part of his routine — which occurred December 16 at the Long Island comedy club Governor’s — C.K. spoke of young non-binary people, stating, “They’re like royalty. They tell you what to call them.”

With a lisping voice, he imitated a young person, stating, “‘You should address me, as ‘they/them’ because I identify as gender neutral.’”

In response, C.K. said, “Okay, you should address me as ‘there’ because I identify as a location, and that location is your mother’s c*nt.”

In another part of his routine, C.K. said that his doctor told him to stop eating ice cream. This is when he started spouting anti-gay slurs. “I said, ‘You need to go f*ck yourself. And don’t ever touch me again, you old f*gg*t. You old f*cking Jewish f*g. Get your f*cking hands off me.’ You’re f*cking with my ice cream, I get upset.”

Speaking of the Parkland shooting survivors who have since become outspoken advocates for gun reform, C.K. said, “You’re not interesting because you went to a high school where kids got shot. Why does that mean I have to listen to you? Why does that make you interesting? You didn’t get shot, you pushed some fat kid in the way, and now I gotta listen to you talking?”

Acknowledging that some people wouldn’t enjoy his new material, the 51-year-old comedian said, “What are you going to do, take away my birthday? My life is over. I don’t give a sh*t.”

During the set, he also mocked people with mental disabilities (repeatedly calling them “f*cking retarded”) and also riffed on the penis sizes of different ethnicities.

Despite his use of slurs, it’s inaccurate to simply call C.K. homophobic.

In 2017, C.K. served as executive producer of Check It, a documentary about queer youths of color in a Washington D.C. street gang. In his FX show Louie, he occasionally incorporated bits mocking homophobia, a welcome counterpoint to his 2011 routine explaining why he doesn’t consider “f*gg*t” as an anti-gay slur.

In 2011, C.K. criticized gay activists who opposed comedian Tracy Morgan after Morgan said in a standup routine that he would stab his child if he ever came out as gay.

C.K. said, “It is clear to anyone with an ability to reason and understand people that [Morgan] didn’t mean a word of what he said.” He added that gay activists should’ve sat down for a conversation with Morgan rather than just publicly lambasting him.

After C.K. admitted sexual misconduct with several women in November 2017, he lost a production deal with FX and had his upcoming film, I Love You Daddy, indefinitely shelved.

He also performed standup routines at New York’s Comedy Cellar in October and November of this year. During one of the sets, he said that the story of his sexual misconduct caused him to lose $35 million “in an hour.”

If C.K. re-enters the spotlight, he will be one of the first men in the #MeToo era to do so after being publicly accused of sexual misconduct.

These two WNBA players got married in a quiet, beautiful ceremony