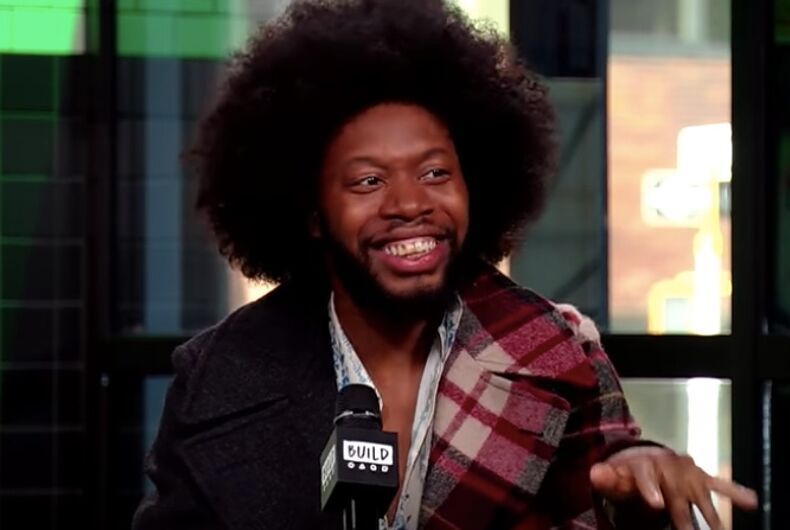 In each scene, one partner is black (or mixed) and the other is white. The play features two different-sex couples — where the male and female partners are alternately black and white — and one same-sex male couple.

[In the opening scene] a slave woman named Kaneisha asks her overseer Jim if he is going beat her. The overseer, Jim, asks her why she would ever think a thing like that…. There’s also Alana and Phillip: She’s a white plantation mistress; he’s a biracial house slave; she yearns to penetrate him. And there’s Dustin and Gary. Dustin’s a white indentured laborer; Gary’s the black slave who oversees his work; Dustin licks Gary’s boots [as he becomes increasingly aroused].

Only near the end of the first act do viewers learn that the play is set in the modern day. The couples are involved in a “radical therapy designed to help black partners re-engage intimately with white partners from whom they no longer receive sexual pleasure,” and are watched by two “chipper” therapists named Teá and Patricia.

Some reviewers have found Harris’ play alternately clever, comedic and challenging, but not everyone agrees.

In a Twitter thread posted earlier this week, black organizer, writer and community advocate Ashley Yates wrote, “This clown (Harris) straight made a play capitalizing off the sexual degradation of Black people and he thinks it’s ok bc he acknowledges it’s f*cked up.”

In a separate own Twitter thread, black New York-based writer Isaiah L. Carter accused Harris of creating a performative form of “woke” racial awareness that exists solely to profit off of and receive praise from white liberals.

Carter wrote, “It is perhaps the most blatant, frankly obscene expression of thirst for the white gaze I have ever seen in my entire life…. It is downright disgusting, and a horrible trivializing of what slavery actually was…. Black male slaves were CASTRATED, beaten with whips, and degraded. Female slaves were raped, often REPEATEDLY, under threat of the whip. If ANY slave got out of line, they were beaten and/or lynched.”

Both Yates and Carter linked to Harris’ December 2016 Vice article in which he discusses “decolonizing” his desire for white gay men. In the article, Harris admits using both white and black media culture during his youth as a way to make him more attractive to white men.

Near the end of the article, Harris writes, “Because I’ve spent most of my life living in a white world — obsessed with its cultural products, its bodies, its validation — I’ve lived most of my life unaware that in doing so, I was failing to exist.”

He concludes by stating that only writing can help him decolonize his personal desire.

A black activist has started a Change.org petition encouraging The New York Theatre Workshop to cancel all remaining showings of Slave Play, calling it offensive, traumatizing and and saying it makes light of a historic atrocity. So far 3,429 people have signed the petition.

For the first time ever, Nickelodeon’s ‘Double Dare’ features a family with two dads

Looking back at 1968, 50 years later, how much has the US actually changed?