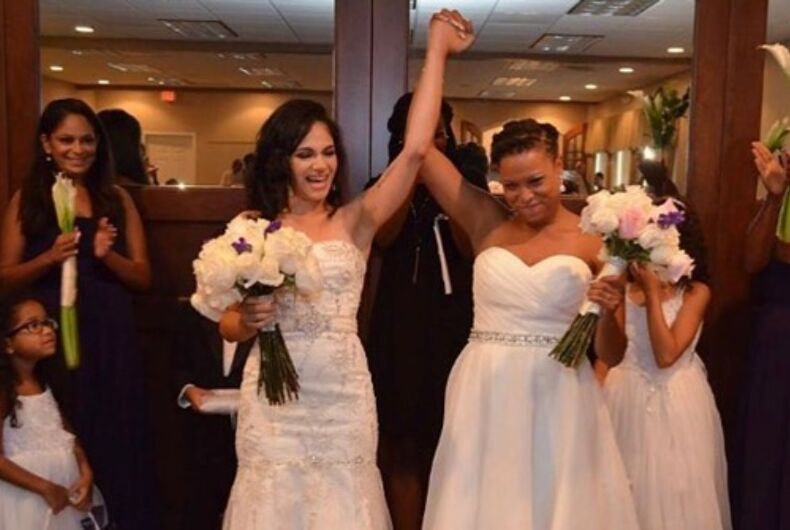 When Glenis Liz-Decuir’s wife Tiffany became pregnant with their third child, she was concerned. She had carried both of the couple’s previous children, and worried that she would not feel the same sort of bonding with the new baby as she did with the others.

Then the two of them uncovered a technique used by adoptive mothers: inducing lactation for breastfeeding. Together, they set out to co-breastfeed their new baby.

“We came up with this together,” Liz-Decuir told LGBTQ Nation “Once we knew it was possible, I went full throttle. I almost became obsessive about it because I wanted it so bad.”

To make it happen required a regime of medication and breast pumping. “I used the Newman-Goldfarb Protocols (for Induced Lactation),” said Liz-Decuir. “You basically trick your body into believing it’s pregnant.”

As well as birth control pills, Liz-Decuir took Domperidone. That’s a digestive medication, but a side effect of the drug is increased prolactin levels.

The only difficulties she faced was remembering to take the pills — and putting on some weight.

“I gained about 30 pounds, but weight gain was a small price to pay,” said Liz-Decuir.

A few weeks prior to the due date of their baby, she stopped some of her medication and began breast pumping, storing a prodigious 700-plus ounces of breast fluid prior to the delivery.

The experience turned out exactly how the new moms had hoped, providing the bonding that hoped for, as well as allowing her wife a bit more freedom.

“It takes a lot of pressure off: my wife can go to the store and leave me with him,” Liz-Decuir said. “The baby will be fed if it’s hungry. It’s not that difficult (to induce lactation), and the benefits of it are amazing.”

With between two and four million children having an LGBTQ parent according to the Family Equality Council, and 2000,000 of those being raised in same-sex couple, this may provide an additional avenue for bonding in some of these families.

At the very least, Glenis Liz-Decuir is convinced that this was exactly the right thing to do for her family.

“When I went into this, I didn’t know what the outcome would be,” said Liz-Decuir, “but the outcome exceeded all expectations.”

You can find more about her and her family, as well as additional information about her co-breastfeeding experience, on her Instagram account or via Aeroflow Breastpumps.

A post shared by Glenis Decuir (@decuirinducinglactationstory) on Dec 3, 2018 at 5:19pm PST