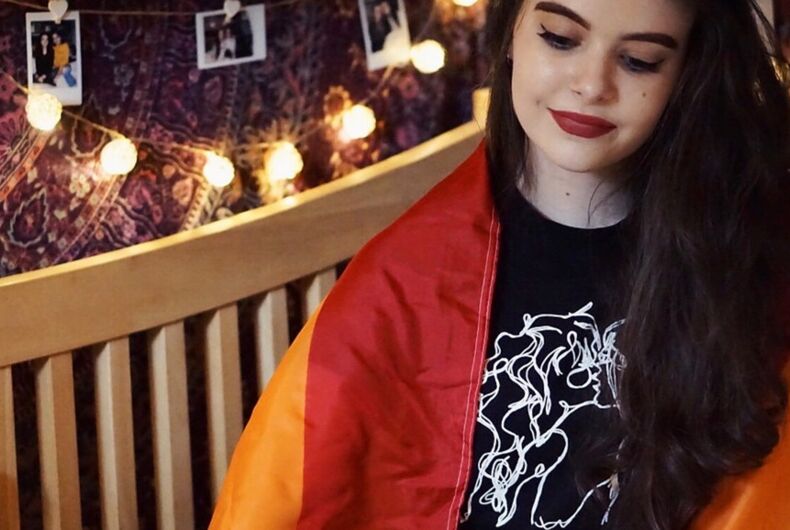 For many in the LGBTQ community, the holidays can be a lonely time of year thanks to many being ostracized from their families, but this woman is seeking to bring a little joy this holiday season though a simple gesture.

Founded by Elena Roberts-Wright, also known as El, the Rainbow Cards Project sends out holiday cars to LGBTQ people who may feel isolated and lonely.

El came up with the idea when she was reflecting on her own coming out during Christmas 2016.

After being too unwell to send any cards out the previous year, things were looking up for El in 2016. As she prepared her own cards, she considered how she feel if her own coming out had gone differently.

She added, “I knew I could never replace someone’s relatives, but I figured I could reach out with a little kindness and help them feel like a part of a bigger family; a family that doesn’t care who they love or how they identify – the international, multi-racial, hundred-language-speaking family that so many of us find within the LGBTQ+ community.”

She took to Twitter that year, asking for people who had been not gotten a card from their family after coming out to message her so she could send them a card.

That first year, she sent 30 cards out to happy recipients in nine different countries. Many also reached out to El to see if they, too, could send out cards or help in other ways, and a new project was born.

Today, the Rainbow Cards Project is still run by El out of her Devon, England home, and while it is not yet a registered charity in the UK, she hopes it will continue to grow and become eligible to be one.

Far from the mere 30 cards of that first holiday season, last year saw El sending out over 2,000 cards to some 300 recipients.

The project doesn’t solely focus on holiday cards although the majority of those sent are during the season. She also sends birthday cards, or for other holidays, if preferred. She recently sent out cards to those who wanted one for Halloween, for example.

“This year we need your help even more since the project has grown and now caters to even more recipients – 385 who celebrate the holidays in total – which means the costs will be even higher,” says a statement on the GoFundMe page.

“Postage is unfortunately very expensive, and if we cannot raise enough money we won’t be able to send any holiday cards, which would be a massive disappointment to our recipients. We’d hate to see that happen, so please do donate if you can.”

What’s more, they are also soliciting others to send in cards, and even have a list of people on their website who have requested cards and whose birthday falls in the current month.

Of course, in a year that has seen relentless attacks on LGBTQ rights around the world, a cheerful card may seem like a small gesture — something that El is well aware of.

“The LGBTQ+ community has so many battles, big and small, and we just wish to bring something positive and uplifting to everyone in amongst all that,” said El on the Rainbow Card Project FAQ.

She added, “We all need some respite from our big battles at times; we need someone to say it’s going to be okay and that we don’t have to face this alone – and that’s all we want this project to be: a tiny bit of respite from everything else we face, a reminder that we won’t fail because we have millions of us holding each other up.”

5 things you need to know for election day

Here are the 6 LGBTQ candidates to watch on election night