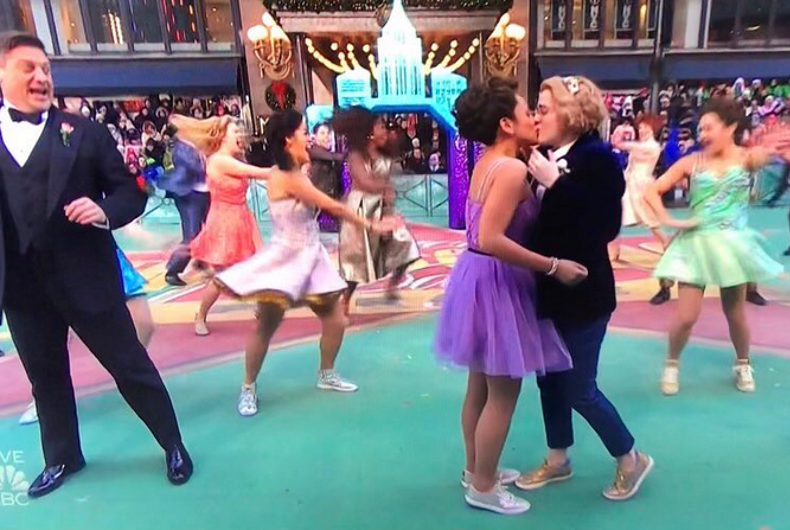 When the cast of the Broadway show The Prom danced into the streets for the annual Macy’s Thanksgiving Day Parade, they gave the LGBTQ community something to be thankful about. The Christian right, however, lost their stuffing.

Stars Caitlin Kinnunen and Isabelle McCalla closed out the big number with an on-camera kiss. It’s believed to be the first time the televised parade has shown a same-sex smooch.

The musical’s producers told EW in a joint statement. “These are some of the themes reflected in our musical comedy and we are very proud to be the very first LGBTQ kiss on the Thanksgiving Day Parade.”

While the producers touted that the kiss matched their values, the “value voters” crowd were busy condemning the peck as a “corruption” and “an airborne infection.”

“Possibly millions of American children are watching, and the producers of the parade and the program know this,” according to Linda Harvey, one of the most wacky of the holier-than-thou anti-LGBTQ crowd. “This offense, this corruption is deliberate as the procession toward normalizing decadence marches on.”

“This agenda is like an airborne infection that’s suddenly everywhere. From ‘LGBT’ affirming church youth groups, to ‘gay’-affirming anti-bullying school lessons, to rainbow ‘pride’ apparel sold at Target and Walmart during the spring and summer, to the obligatory pro-homosexual article in the daily newspaper, to disturbed transvestites reading to preschoolers in libraries,” Harvey thundered.

You can tell she’s serious about the subject by her use of unnecessary quote marks around common terms.

“It seems to be critically important to stick it to our children, all in the name of phony ‘tolerance’ and ‘acceptance’.”

Not to be outdone, the right wing mob also took to social media to clutch their pearls and threaten boycotts that won’t make a bit of difference.

It is sad I just had to change the channel from the #macysthanksgivingdayparade because my 5 yr old is asking me why the girl is wearing a tie and holding hands with the other girl during the “The Prom” number on @TODAYshow.

Wow #Macyday #ThanksgivingDayParade parade has totally went to the crapper with a #lesbian kiss on national TV while millions of children watch two women make out on a #Thanksgiving as parents DONT LET KIDS WATCH THIS STUFF!!!! Boycott #Macy's this was a total #abomination!!! pic.twitter.com/LmQVmTh11K

Still, this reaction may sum up the “controversy” most aptly:

Me and my fellow gays dancing in the tears of everyone complaining about Macy's airing a LESBIAN KISS pic.twitter.com/WDK16FRWgj