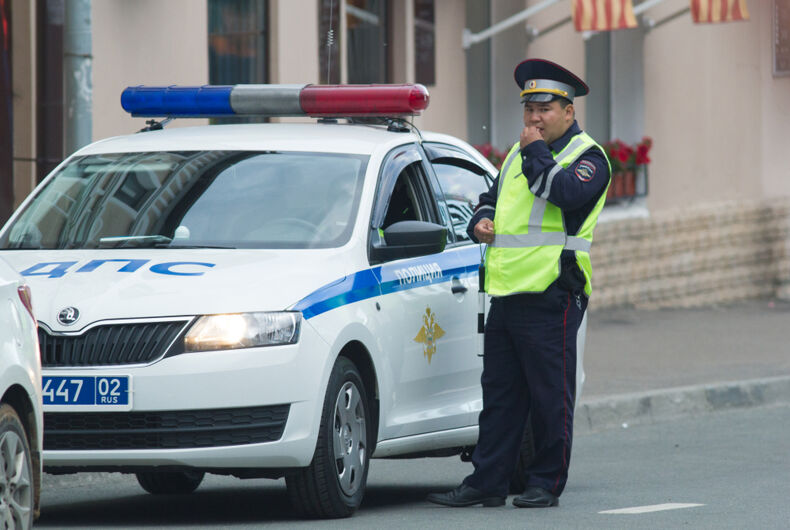 A police officer on duty in Kazan, Russia on June 21, 2018.Photo: Shutterstock

Two Russian LGBTQ activists were sprayed in the eyes with an “acid substance” after leaving a venue where they were going to hold a conference. Other organizers were also hit with the unknown substance.

The activists had planned to hold a conference on LGBTQ families, but funding issues and security threats forced the event to be cancelled. The group was attacked as they were clearing out the venue and walking outside.

Related: 3 men attacked with acid outside gay club may have lasting injuries

“They were sprayed with the same acid substance as me and my colleagues last year,” organizer Nadeshda Aronchik told Pink News, an LGBTQ new site based in the United Kingdom. She believes the person responsible for last year’s attack is also behind this one.

“After the attack, the organisers received threats through calls and SMS saying they should ‘die’ and ‘burn in hell’ and saying, ‘How did you like our present? Last year was only the beginning,’” Aronchik told the site.

Aronchik said police were “ambiguous” when the crime was reported. “They were as friendly as Russian police can be,” she said.

“The policeman was semi-friendly. He had some homophobic and misogynistic statements but not as homophobic as I’ve experienced before, so it was kind of fine,” she added.

“He asked what happened and every time he mentioned something homophobic I told him he was out of line and should mind his job rather than commenting on what the guys are saying. So all in all I’d say, for the Russian police, it was OK.”

The activists were treated at a local hospital and released. The injuries are not life-threatening.

How the Transgender Day of Remembrance is being honored today