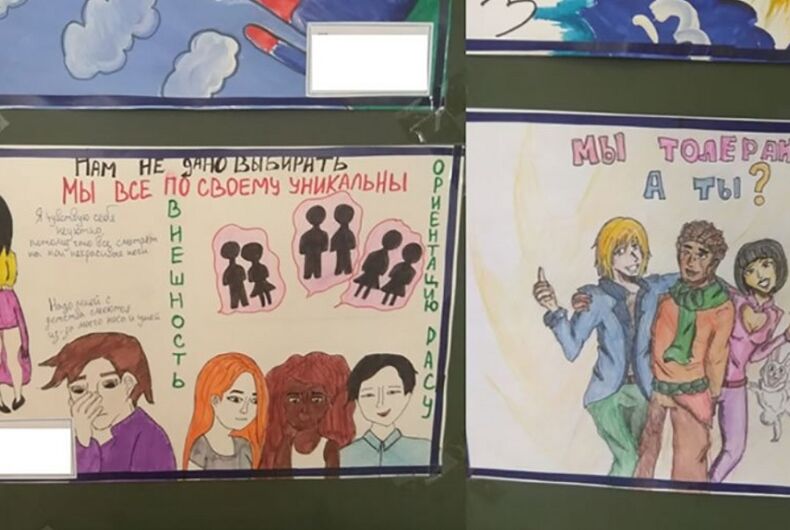 Russian police have seized 17 drawings from a school contest to investigate them as “homosexual propaganda.”

A school in Yekaterinburg, Russia’s fourth-largest city, held a contest earlier this month for the UN’s International Day for Tolerance.

Students submitted drawings, and many of them were displayed in the school.

The drawings became an issue when someone sent a photo of one of them to the news site Ura.ru, which ran a story about the pictures entitled “Ural School Holds Contest With Posters Showing Gays and Lesbians.”

The student who made the drawing wrote on it: “We don’t choose our appearance, orientation, or race. We are all unique in our own ways.”

This prompted an investigation by the Education Department, since a 2013 law in Russia bans showing “propaganda of non-traditional sexual relationships” to minors.

An Education Department spokesperson said that no “propaganda of sexual minorities” was found in the drawings.

Psychologists were also sent to the school, according to the news site Meduza, to conduct “outreach work” and “clarify the drawings to students and parents.” But they said that the pictures did not qualify as gay propaganda.

That didn’t satisfy the police, though. Seventeen of the pictures have been seized and an investigation into the school has been opened.

“We’re now checking if this event was really dedicated to the day of tolerance,” said a spokesperson for the Sverdlovsk regional police.

The said in a statement that the investigation was opened because of “multiple negative reactions from parents.”