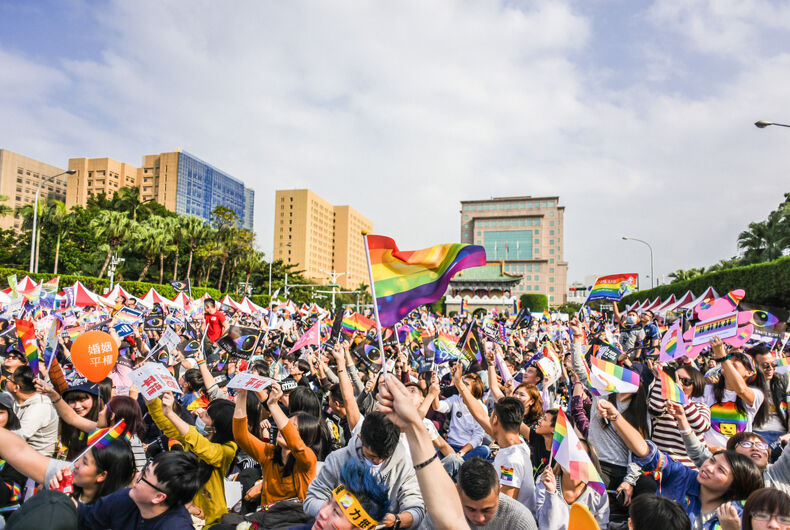 This Saturday, Taiwan will vote on same-sex marriage and LGBTQ education in public schools.

There are actually several ballot measures under consideration: whether the Taiwanese Civil Code should change its definition of marriage to include same-sex couples, whether same-sex marriage should be legalized under an entirely new law and whether public schools should teach kids about LGBTQ topics.

What’s with the marriage vote?

The first two measures are actually two sides of the same coin: LGBTQ activists would prefer to change the Civil Code rather than creating a separate law. It’s similar to when U.S. legislators had to decide between legalizing marriage equality or civil unions (generally distrusted as “separate but unequal second-class marriages” by activists.)

While civil unions might sound like an ideal compromise between religious freedom and civil rights, they’re an imperfect solution because the average person has no idea what they are. As such, everyday citizens treat them differently from marriages even if they’re supposed to be legally indistinguishable.

No matter what happens, Taiwan will still likely become the first Asian country to legalize same-sex marriage. The vote will merely determine how quickly it happens and the nation’s overall attitudes towards LGBTQ people.

How did we get here?

On May 24, 2017, Taiwan’s Constitutional Court ruled that the Civil Code’s current definition of marriage — between a man and a woman — was unconstitutional. The Court gave Taiwanese legislators two years to legalize it.

But Prime Minister Tsai Ing-wen (who ran on an equality platform) and other legislators were too timid to take action. Their inaction allowed anti-gay religious petitioners to turn the question into a ballot measure, letting citizens decide rather than elected officials.

Will the vote pass?

It’s unclear, but there are a few positive indicators that marriage equality has a fighting chance.

For one, the country is already one of Asia’s most LGBTQ-friendly. Its annual pride parade is Asia’s largest in Asia and the government is also considering a ban on so-called ex-gay conversion therapy.

“Although these groups account for less than 10% of the population,” says Democratic Progressive Party legislator Yu Mei-Nu, “they are vocal and can mobilize a lot of people. They evoke a lot of fear among people and spread false information. They do so especially among older people.”

No matter what happens, the Court has said that some form of same-sex marriage must be legal by May 24, 2019.

If voters approve a change in the Civil Code, we may see Taiwan’s religious conservatives crowing about religious freedom and their right to discriminate, similar to what we’ve seen in the U.S.

If schools are forbidden from teaching LGBTQ content, then we’ll likely see the LGBTQ community start to fight for greater representation in Taiwanese media. Currently, gay characters remain largely encoded and hidden in TV and film.