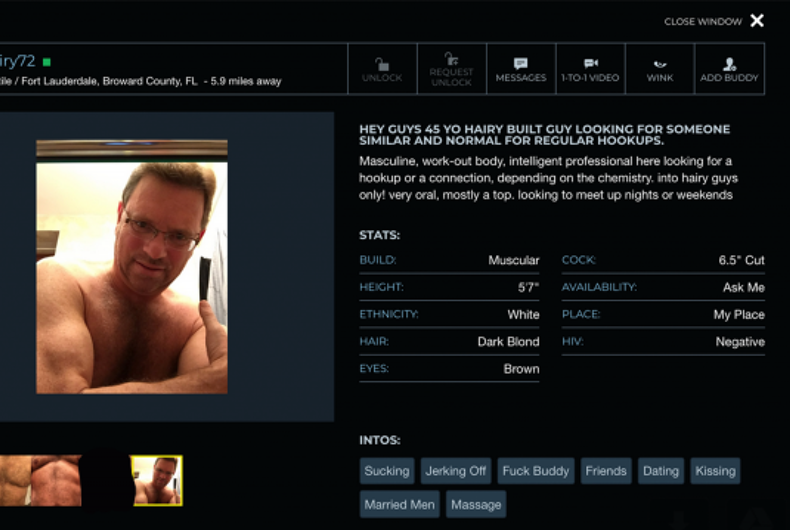 Conversion therapist Norman Goldwasser was found on two gay hook-up sites, according to the LGBTQ organization Truth Wins Out.

Goldwasser, who practices psychology in the Miami area, has a history of promoting and providing treatments that he promises will end homosexuality.

According to his Psychology Today profile, he treats “unwanted bisexuality” and charges $280 a session. His profile on the Torah Science Conference website claims that he treats “sexual orientation confusion.”

In 2006, Goldwasser co-authored a paper entitled “Holistic Therapy: A Comprehensive, Clinical Approach to the Treatment of SSA [same-sex attraction].” In the paper, he compares homosexuality with Obsessive-Compulsive Disorder.

He even wrote a post for the far-right website Free Republic in 2010 that promoted JONAH, a Jewish conversion therapy organization that was sued and forced to shut down.

Related: Christian conservatives are trying to rebrand conversion therapy bans like they did abortion laws

Now Truth Wins Out says that they found two of Goldwasser’s profiles on gay cruising sites: Manhunt and BearNation. The organization says that they contacted him and he agreed to meet for a hook-up.

Goldwasser goes by the name “hotnhairy72” on both websites and says that he has a “masculine, work-out body” and is “mostly a top.” His Manhunt profile notes that he’s a “married man,” which most likely refers to a marriage to a woman who doesn’t know about his extramarital activities.

His Manhunt profile also claims that he is 45-years-old, even though several of his professional profiles imply that he’s substantially older than 45. For example, his own website says that he has “more than 30 years of experience as a clinical psychologist,” but it doesn’t mention him starting to practice clinical psychology in early adolescence.

Wayne Besen of Truth Wins Out shared Goldwasser’s plea for mercy in an online conversation (lightly edited for spelling and grammar):

I am going to take what you said to heart, and process it. If you want to prove a point, then please do so without destroying my ability to support my family. You are right that this is what I caused, and there may be no room for empathy for me. I have innocent children and grandchildren who are still suffering from the loss of their mother, and they don’t deserve to be traumatized any further.

I will follow through on what you said about posting a letter. Let me know what is the best way to do that.

“We urge every state to ban the scourge of conversion therapy that attacks the mental health of LGBT youth and puts them in harm’s way.”

Goldwasser did not respond to LGBTQ Nation‘s request for comment by the time of publication.