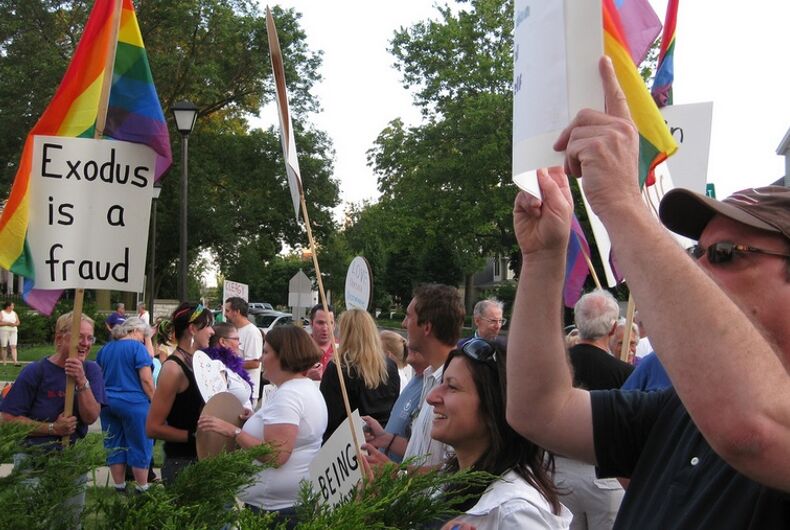 Members of the Gay Liberation Network and other LGBT rights groups gathered in protest of Exodus International in 2009, an organization that promoted conversion therapy. Photo: Flickr/Kevin Zolkiewicz/Creative Commons li

With 14 states and D.C. banning conversion therapy for minors, Christian conservatives are trying to frame the issue differently to turn the tide.

Instead of “conversion therapy bans,” they’re calling them “must stay gay laws.”

Over the past few months, numerous rightwing publications have used this or a similar expression to refer to a conversion therapy ban.

A Google search of the expression turned up around 14,000 results, including a headline at the Daily Signal:

California’s ‘Must Stay Gay’ Bill Would Cause Severe Harm

LifeSiteNews, one of the biggest religious right websites, ran this headline yesterday:

California’s ‘stay gay’ bill is about to become law. Why Christians must refuse to obey it

The framing may have started with Michael Brown, a conservative radio host and author and self-identified Messianic Jew, a branch of Judaism that believes that Jesus is the son of god.

An April 5, 2018, post on his website entitled “California’s Shocking ‘You Must Stay Gay’ Bill” calls conversion therapy bans “a brazen assault on our most fundamental freedoms.”

“This would apply to a 14-year-old girl who was raped by her uncle at the age of 8 and now feels repulsion towards men and attraction towards women,” Brown wrote.

He appears more concerned that a victim of child rape can be forced into conversion therapy than with her access to real mental health care.

Of course, that isn’t the case. LGBTQ people have been trying to “pray away the gay” for decades, getting nothing but depression, shame, anger, frustration, and suicidal thoughts for their trouble.

And if the experiences of people who have tried conversion therapy isn’t enough proof, the America Psychological Association’s 2007 review of academic research found no evidence that sexual orientation change efforts resulted in changed sexual orientations.

“Must stay gay” also makes the issue sound like people really want conversion therapy, and people generally don’t like it when the government stops people from doing what they want to do as long as they aren’t hurting anyone. But most states’ conversion therapy bans are only for licensed medical and mental health professionals, and only protect minors.

Since children and teens are particularly vulnerable to being forced into damaging practices like conversion therapy, it makes sense that the government would protect them until they’re adults.

California’s proposed conversion therapy ban goes further, classifying commercial claims that a therapist can change their clients’ sexual orientation as a form of fraud. Adults will still be free to seek out whatever therapy they want, but the person providing the therapy will just have to be honest about what’s being offered.

Conservatives have a history of turning to framing to win a moral battle that they’re losing, like calling anti-choice activists “pro-life,” renaming anti-union legislation “right to work bills,” and using the euphemism for torture “enhanced interrogation methods.”

The problem for Christian conservatives is that the term “conversion therapy ban” is, if anything, already a favorable framing of the issue. “Conversion” just means “change,” and therapy is generally a good thing.

A more hostile framing would be “religious child abuse ban” or “LGBTQ genocide ban” or “Stop the Christian lies bill.”

If state legislators – including many Republicans – are already willing to ban something that sounds as innocuous as conversion therapy, then the real issue is the substance, not the framing.