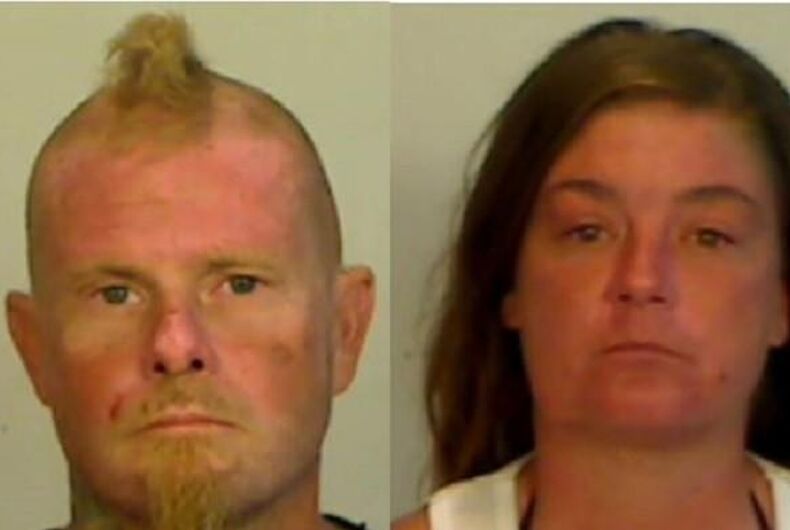 Two people were taken into custody in Florida in connection to an attack on two gay men.

Two gay men from California were in Key West and rented a boat. At around 4:30 on Saturday afternoon, they were leaving the boat in a dinghy when they were approached by a straight couple.

Police say that Christopher Thomas John Yarema, 43, and Stephanie Lynn Burnham, 35, yelled at the victims from another boat, apparently angry about their swim briefs.

“Hey, Mr. Speedo [expletive], get the [expletive] off our island,” the police report says they said. The victims said that they also heard anti-gay slurs and other expletives.

“You have five seconds to get off, or I will kill you,” Burnham said.

Yarema then punched one of the victims in the face and broke his sunglasses.

When the victim who was punched pushed Burnham away, Yarema said, “You knocked down my wife, I’m going to kill you.” He took out a four-inch-blade, tried to stab the victim, but missed and slashed their rental dinghy.

The gay couple used the leaking dinghy to get back to the boat and radioed the Coast Guard for help.

The rental company said that they caused between $2000 and $5000 in damage to the dinghy, and the sunglasses that Yarema allegedly broke cost $800.

This drag queen broke character & it brought the audience to tears

Did this action movie star just come out? It sure seems like it.