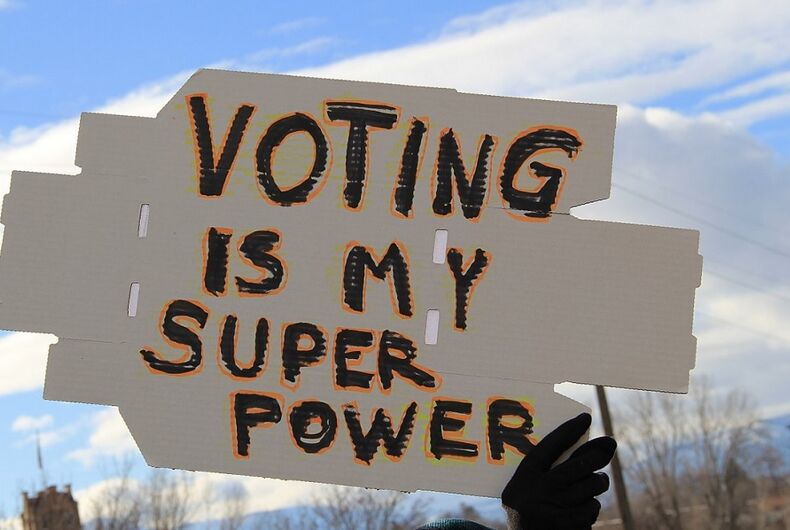 She spent four years as executive director of EMILY’s list — the nation’s largest resource for women in politics — and more recently served as CEO of the Democratic National Committee.

“Then I sort of got drafted for by my party, and agreed to be the CEO of the DNC which I did for about a year, and then decided to try my hand at consulting.” Despite all that work, O’Connell found time to get married to her wife Holly, and to welcome their newborn son Adrian to the family.

O’Connell, who now consults with groups that are working on elections, as well as voter registration supporting candidates — “Because we’ve gotta win,” she said — recently took some time to reflect on past elections and discuss this year’s midterm elections.

“I’m proud of what we did at the DNC. I think we really jump-started with winning,” O’Connell said. “That was my focus when I went to the DNC after the 2016 election.”

“Winning is the best antidote. We needed to start winning elections, and in 2017 that’s what we did. We won three big ones; two governorships in New Jersey and Virginia, and then Doug Jones’ Senate victory in Alabama. The DNC was the first committee to go into Alabama.”

“And then the flipping of the seats, along with DLCC and others, investing in down the ballot in a meaningful way and helping to flip over 40 seats from red to blue.”

The staying power of grassroots engagement, in response to the Trump administration and the Republican party’s policies promises to be a boon to Democrats going into midterms, says O’Connell.

“There was a lot of talk after the 2016 election, and one of the first actions was the Women’s March. It was one of the largest actions ever, and everyone thought it was going to dissipate because that’s what always happens after an election. And it didn’t.”

“It continued with the healthcare fight which followed, and that was a fight we weren’t expected to win. But women mobilized. The congressional switchboards broke, with so many people calling in and activating, and 80 percent of those calling in were women.”

The current Republican lock on practically every branch of government has opened people’s eyes, O’Connell says. “Losing the presidency in the manner which we did with this president, compared to such a qualified person in Hillary Clinton, really stung and hurt people. People look at what’s happened since then and look at Democrats losing over 1000 seats in the last decade, and they start to connect the dots.”

“For a long time, we’ve needed more diverse perspectives and voices at every seat of the legislative table, both in the states and federally. Right now, Donald Trump and the Republican party are showing us why that matters. There’s such a massive power grab by Republicans right now. They’re showing us who they truly are, and that’s why there’s so much energy out there right now.”

The contrast between the two major parties, in O’Connell’s eyes, is sharper than it’s been in many years. “There is a distinction. The parties are not the same, and people see that in the way that Donald Trump says one thing but legislates another way,” she said. “LGBT issues is a perfect example. He ran for president saying he was a friend of the LGBT community, but the minute he won installed one of the most anti-LGBT cabinets in history. And everyone sees that for what it is now. ”

“They’ve revealed themselves to be extraordinarily extreme and trying to roll us back to a time when not everybody was equal. And people in this country don’t want to go backward. We want to go forward.”

There’s a reason why people are taking politics personally. “Politics is personal. That’s always been true,” O’Connell says. “The more that we have women, people of color, and LGBT people stepping up to run, to have a voice, and to have leadership in their communities, we’re going to hear about a diversity of issues.”

The most important thing for people to remember, O’Connell says, is never to give up.

“Don’t give up. They win if we give up. Every conversation can make a difference. Democracy is fragile, and civil rights are fragile, but as long as we participate, they can be strong.”

When it comes to Republicans, there is no justice. There can be no peace.