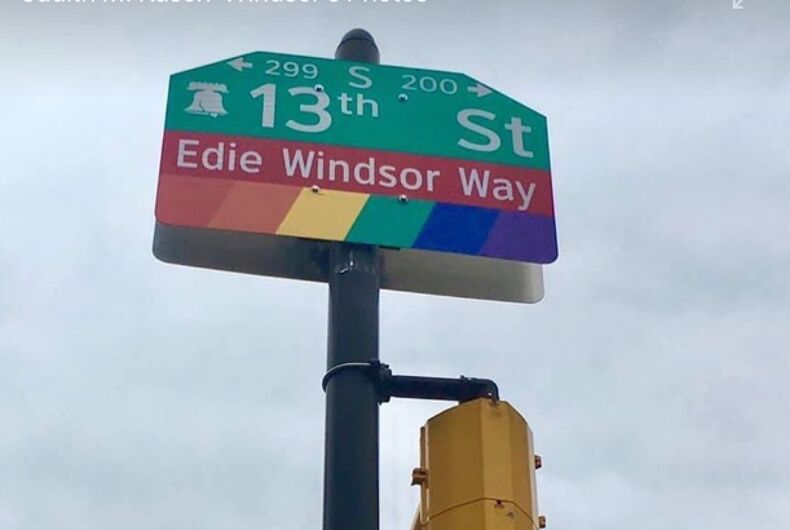 Edie Windsor will always be remembered by American LGBTQ people as the woman who struck the first blow for nationwide marriage equality. Now, Philly residents will always be reminded of the important role she played in the community.

Her wife, Judith Kasen-Windsor, posted photos of the new signage for “Edie Windsor Way” on social media along with “We refuse to be Invisible.”

The Supreme Court struck down the Defense of Marriage Act in 2013 after Windsor sued the federal government for denying her an exemption from federal estate taxes following the death of her first wife, Thea Spyer. Windsor, who paid $363,053 in taxes, said in her case that the law unconstitutionally treated same-sex spouses differently from opposite sex spouses.

While the court struck down the law’s definition of marriage as solely between a man and a woman, it didn’t go so far as declaring a constitutional right for same-sex couples to marry. A later ruling by the court in 2015 gave gay and lesbian couples the right to marry nationwide.

The Philly city council issued a proclamation to celebrate that the block, located in the heart of the city’s LGBTQ district, will be recognized in Windsor’s honor.

WHEREAS, Edith “Edie” Schlain Windsor was a native Philadelphian, Temple University alumnus, iconic national LGBTQ-rights activist, and whose lawsuit against the federal government is widely regarded to have paved the way for nationwide marriage equality and is among the most important U.S. Supreme Court rulings for LGBTQ rights in American history.

WHEREAS, Edith Windsor was the lead plaintiff in the landmark 2013 case, United States v. Windsor, which led the U.S. Supreme Court to rule the Federal Defense of Marriage Act unconstitutional, and for the first time guaranteed same-sex couples the right to federal recognition and benefits previously accorded to heterosexual spouses; and

WHEREAS, The City wishes to commemorate and honor the legacy of Edie Windsor through the renaming of the 200 block of South 13th Street in her honor; now, therefore be it

RESOLVED, BY THE COUNCIL OF THE CITY OF PHILADELPHIA, That the 200 block of South 13th Street, between Walnut Street and Locust Street in the City of Philadelphia, shall henceforth also be known as “Edith Windsor Way”.

Edie loved to dance! I'm sure she was watching the party at Edie Windsor Way!

More cities than ever are LGBTQ-friendly now. So how does yours rate?