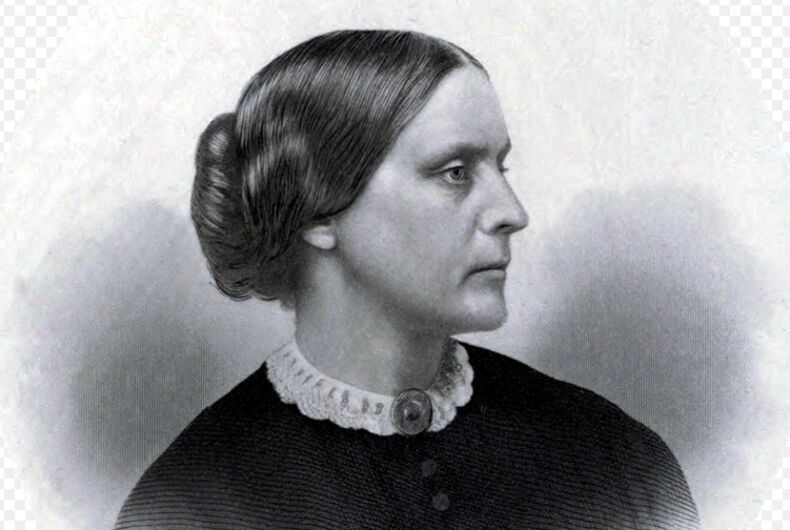 Examples of lesbian sexuality are all over early American history.

The 19th century saw a myriad of reasons why lesbianism was actually embraced, right up until the turn of the 20th century, when it wasn’t.

If there are all these depictions of blissfully naked lesbians over centuries, why some historians write that “We don’t really know if A and B who shared the same bed for 50 years were sexual”?

There is ample proof if we examine the confluent and overlapping milieux of women’s education and the suffrage movement, both of which opened up new vistas for women to examine their choices in society.

One of those choices was lesbian relationships instead of marriage to a man and the constraints of a family. Raising children and running a household was restrictive of women’s time and energy and left little for the work of suffrage or social reform.

Lesbian relationships bore none of the oppressive and repressive hallmarks of compulsory heterosexuality. As Elizabeth Cady Stanton, who was married to a man and the mother of seven, but who had a long relationship with Susan B. Anthony, wrote of her same-sex relationship, “I prefer a tyrant of my own sex, so I shall not deny the patent fact of my subjection; for I do believe that I have developed into much more of a woman under her jurisdiction.”

For her part, Anthony was clear: Men held women back. At 18 she had written in her diary, “I think any female would rather live and die an old maid.”

Throughout her life as a suffragist she never failed to mourn the losses of other suffragists to the constraints of marriage and family which overrode their time and took them from the cause of women’s enfranchisement.

The efforts to suppress women’s independence were hardly new. For millennia women’s lives had been controlled, particularly their sexual autonomy.

How do we know women were engaged in sexual lesbian relationships? We know because teenage girls and young women were already having sex together at boarding schools and seminaries–why would they stop when they got older?

When women’s education advanced past the local schoolhouse and became an acceptable option in the 19th century, same-sex seminaries – places for secondary education – began to evolve.

One of the pressing concerns in the writings of the time was lesbianism. Young female students — most in their mid to late teens — were developing what were reductively referred to as “passionate” or “romantic” friendships. Mashes, crushes, smashes: these were all terms used to describe love affairs between young women at school in the late 19th century.

At the same time, women’s education was becoming more of a concern as a masculinizing threat to feminine – and heterosexual – women. In 1874, Edward Clarke wrote of the dangers of these all-female environments turning women into men.

Sex Education or a Fair Chance for Girls is one such exhibit of social fears. Too much education for women would be perilous, Clarke explained, repeating anxieties that women were both too limited to absorb education as men do and that if they were inculcated with too much knowledge, it would harm them irreparably by turning them into, well, lesbians.

Clarke argued that studying hard in an all-female environment would do damage to women’s reproductive organs, tax their brains and cause hysteria “and other derangements of the nervous system.” Clarke evinced concern that if women became too educated and too independent they would also become masculine.

Lesbianism was a significant threat, according to Clarke, and educated women had to be careful to “remain women, not strive to be men, or they will ignominiously fail.”

Charles Thwing, warning of the lesbian takeover of women’s colleges, in 1894 in The College Woman, was succinct 20 years after Clarke: What if women became “brutes” at college and lost their femininity by behaving like men?

Worse, Thwing asserted, what if educated women began to think that relationships between women were a substitute for heterosexual relationships?

Against the backdrop of a burgeoning suffrage movement was this pulse of women educating themselves and becoming more and more independent of men. Thwing never mentioned moral objections to these lesbian relationships within the confines of colleges, but he did believe their intensity — women being far more emotional than men — was dangerous to the young lovers’ health.

“Many college friendships are exceedingly exhausting,” Thwing said. “Women give themselves up more readily than men to intimate relations. College officers are wise in cautioning students against too warm friendships, especially against forming them in the first year of college life.”

The shift away from the embrace of these lesbian affairs that had once been seen as a means of keeping women’s sexuality in check occurred because fewer women were ready to marry once they had had an education.

Lesbian relationships were fine as Freudian stepping stone to grown-up heterosexual relationships, but not as an end in themselves. All these fears about lesbians abounded, even as people were told that lesbian sexuality was actually a fiction.

But was it? The most famous lesbian in America in the 19th century was suffragist Susan B. Anthony, whose affairs with women – the aforementioned Elizabeth Cady Stanton as well as Rachel Avery, Anna Dickinson, and Emily Gross – were well-known even at the time.

Anthony was one of the most ardent and vociferous suffragists and as such was targeted by the media as a “manly,” which was the worst accusation that could be hurled at a woman. It was an accusation she refuted in a 1900 essay titled “The New Century’s Manly Woman.”

Anthony believed strongly that women were damaged by their relationships with men, which she perceived as stifling a woman’s talents and abilities beyond the maintaining of home and family. Ida B. Wells, the journalist, suffragist and civil rights activist, complained that once she married and had her first child, Anthony was annoyed with her, telling her that she was too talented for marriage and motherhood.

In erasing the physical passion of the lesbian relationships among suffragists, historians miss the importance that that sexual component had for these women – the very reason their heterosexual peers married: companionable, accessible, intimate sex.

In her love affair with Dickinson, Anthony wrote flirtatiously. But it had been Dickinson – much pursued by other women – who had pursued the older Anthony. She wrote, “I want to see you very much indeed, to hold your hand in mine, to hear your voice, in a word, I want you — I can’t have you? Well, I will at least put down a little fragment of my foolish self and send it to look up at you.”

Are we expected to believe these were sexless exchanges of the mind only? That’s revisionist nonsense. Whether or not these women put the word “lesbian” to their relationships did not make those relationships any less fully lesbian – including sexually.

Anthony also wrote encouraging words to Dickinson, who was on the front lines as well, noting, “Ah, Anna, your mission will brighten and beautify every day if you will but keep the eye of your own spirit turned within… [where] that precious jewel of truth is to be sought — and formed — And darling — you will find it & speak it, and live it — and all men and women will call you blessed.”

The letters between the two are full of over-heated comments and sexy talk; these women who have been portrayed as “unsexed” or “old maids,” were in fact engaged in passionate affairs that propelled them forward in their work for women.

Throughout America there were lesbian couples at the women’s colleges and in the various reform movements from abolition to suffrage and then the rising social work and worker’s rights movements. The “Boston Marriage” – two women living together – was desexualized specifically because men feared those relationships and how they might spread, like a contagion.

That fear is an undercurrent and thread throughout Henry James’ classic novel The Bostonians, in which a romantic triangle includes Basil Ransom, a political conservative from Mississippi; Olive Chancellor, Ransom’s cousin and a Boston feminist and suffragist; and Verena Tarrant, a pretty, young protégée of Olive’s.

The entirety of the 1886 novel is a battle between Basil and Olive for the affections of Verena – as well as for her personhood. That Basil and Olive are presented as equal suitors for Verena’s love is indicative of how deeply lesbian relationships had penetrated the Zeitgeist and how confused and confusing it was for society in deciding what to do with both the relationships and the lesbians themselves.

They were there – from Sappho to Susan B. Anthony – these lesbians with their passionate affairs and life-long partnerships. Nearly 400 years ago, Mary Hammon and Sarah Norman may have been the only lesbian couple in America prosecuted for “being lewd upon a bed together,” but they were not the only lesbian couple being lewd upon a bed, nor kissing a girl and liking it.

All history has an element of revisionism, but to revise the breadth of lesbian sexuality out of these relationships because they were in a time before our own is to erase a significant part of our history, and as such, ourselves.

What Canada geese can teach us – & Donald Trump – about working together