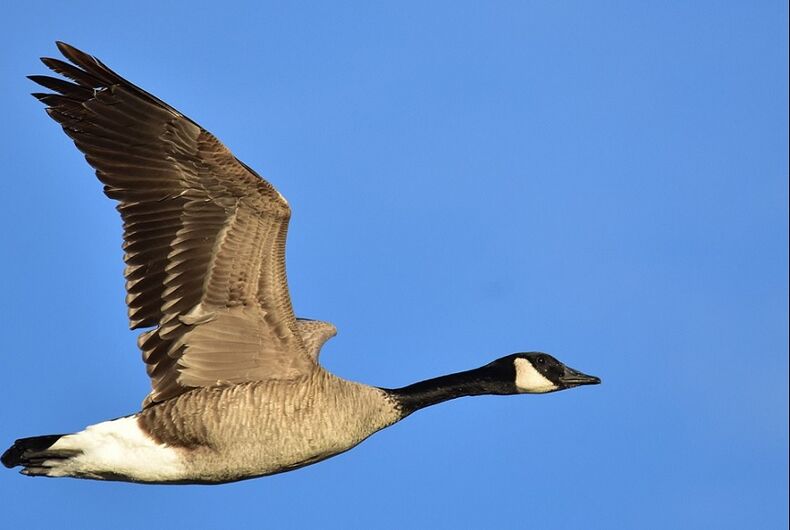 I look forward each spring and autumn to the heavenly performance overhead as Canada geese (Branta canadensis) migrate in their distinctive V-shaped formations.

I stand fascinated watching as these beautiful animals, with glistening black heads and necks, white patches on their faces, and brown bodies take respite from flight casually laying down or slowly walking on rolling fields, and wading in gleaming waters.

At these times, I reflect on what we humans can learn from these majestic co-inhabitants of our planet. Over millennia, these winged creatures, which reflect the near full range of human hues, have pecked out a sturdy and durable governing social structure carefully balancing what we humans continually struggle to achieve: a resilient and robust community balancing a solid sense of security while protecting the individuality, privacy, freedom, and liberty of its members.

Our shimmering feathered friends rotate as flight formation leaders. Each member, regardless of sex, has an opportunity to lead and to serve, to take responsibility and risk, and to achieve. The Canada geese have developed a true meritocracy, unlike our species, which has developed a social hierarchy dependent on humanly constructed categories like race, gender, socioeconomic background, and other variables.

The birds’ collectivist social structure enhances their security by providing a greater ability to scare off predators, and to assist the flock in locating its migratory areas year after year. With this social safety net firmly in place, each individual has the freedom to soar from an average cruising altitude of approximately 3,000 feet to the heights of as much as 29,000 feet above the earth.

They freely choose their mates, with whom they remain over the course of their lives. Both females and males take on care of the young. When one member of the partnership dies, they choose another. And yes, same-sex couples are welcomed and serve as integral members of the flock.

Their very survival is based on their interdependence, their collectivism, their communitarianism. Without this structure, the consequences could be disastrous, even species ending. If individuals were to go it alone, their choice of mates would diminish substantially, they could easily lose their way in flight, they might not find resources to sustain life, and predators could easily pick them off one by one.

Each individual’s freedom to soar depends on a sense of security and protection based on their collectivist communitarianism founded on their firm and intractable governing structure.

Genetically programmed predispositions do not impact human drives and actions as highly as our neighbors, the Canada Geese.

Many of the principles championed and undertaken by the Trump administration and our legislative leaders violate survival instincts often found in nature.

Trump has loosened U.S. ties with NATO, an organization that has served to prevent major outbreaks of international warfare for over 70 years.

He has insulted our allies and trading partners thereby reducing U.S. influence on economic, political, and social structures, while simultaneously disengaging from international agreements such as the Paris Agreement on Climate Control and the Iranian Nuclear agreement, the latter which placed verifiable controls on that country’s development of nuclear weapons.

Trump’s declared “America First” doctrine leaves America alone to navigate the stormy winds of change, placing it vulnerable to collective actions from predators within and beyond its shores.

Maybe, though, we would do well to heed the lessons nature teaches. By following its models, we too can lift our species higher where the human potential can soar, where birds of our multicultural feathers not only flock, but live and thrive in peace and harmony.

How lesbianism was turned into a problem, a century ago