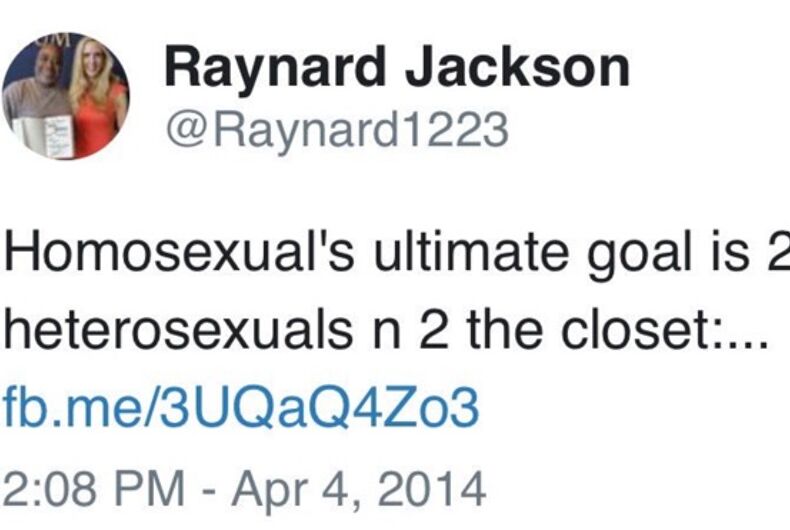 DeSantis shared the stage with Jackson at a Black Professionals summit in Miami. Jackson took that moment to shout at a woman who asked DeSantis about the school-to-prison pipeline – the discorporate tendency of disadvantaged people, mostly of color, to end up incarcerated due to harsh school policies.

Some difficult moments in Ron DeSantis last 305 stop of the day, Black Professionals Summit…
Panel Host Raynard Jackson & an insistent audience member go at it over her Q&A interruption…What could have been a bonding event ends in tension…@WPLGLocal10 pic.twitter.com/JyXtwHMYCt

Jackson has a long history of inflammatory, anti-LGBTQ views, and regularly takes to twitter and other venues to share it.

For one, Jackson claimed that LGBTQ leaders were using the Pulse nightclub massacre as a tool to further a “radical homosexual agenda” in an attempt to “force” acceptance of “their lifestyle choices.”

He has also claimed that the ultimate goal of the LGBTQ rights movement is to “force heterosexuals n 2 the closet,” and believes that GLAAD spends its time “defaming others” in order to give LGBTQ people “special status”

Meanwhile, DeSantis is no stranger to his own controversies. In August, right after the Florida primary, DeSantis warned people to not “monkey this up” by electing his opponent, Andrew Gillum. Gillum is black.

In the wake of those comments, it was also revealed that DeSantis was an administrator for a racist, tea party focused Facebook group, but he did not appear to be active in the group, and left it as soon as his association was revealed.

This is also not the first controversial associate of DeSantis, who has also appeared at events hosted by anti-Muslim activists such as Milo Yiannopoulos and Steve Bannon.