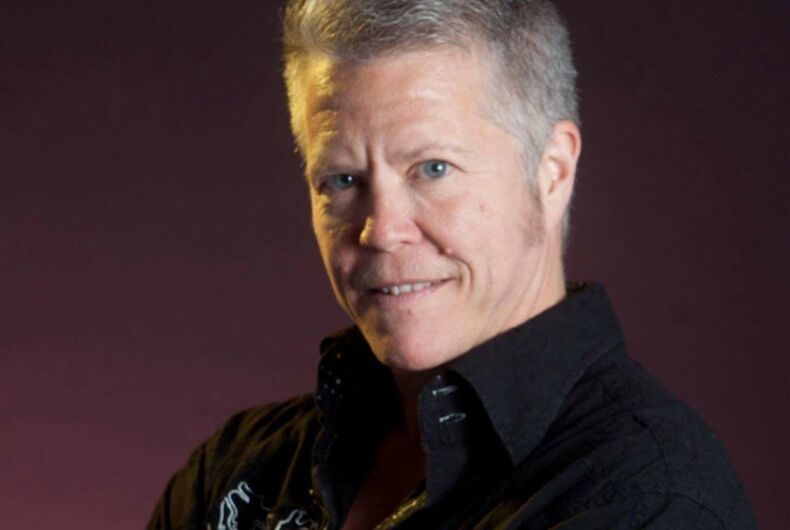 Mac McGregor is no stranger to politics. Last year the Seattle LGBTQ community leader and activist ran to become the first openly transgender member of the city council.

A world martial arts champion, McGregor sold his training studio and moved from his native Florida to Seattle in 2008. He served on the Seattle LGBTQ Commission from 2011 to 2016. He’s also a personal life coach, self-defense teacher, and motivational speaker.

MacGregor isn’t on the ballot this year, but he’s working to make sure everyone understands how critical these midterm elections are.

“I am helping to register people to vote, and talking to people about the importance of the midterms,” he said. “We can’t let exhaustion get the best of us. These midterms are extremely important.”

Motivating others to vote is everyone’s job, according to McGregor.

“I’m also supporting candidates that I believe in,” he said, “and trying to mobilize people to help talk to their friends and neighbors and family members, not just to assume that those people are going to vote.”

“I think that sometimes we assume that those people are going to vote, and they may need our encouragement or a reminder. We have to not only mobilize people to vote themselves, but to also reach out to those around them, and encourage their involvement.”

When it comes to motivating people to get out and vote, McGregor suggests the ongoing controversy over Brett Kavanaugh’s nomination to the Supreme Court may be a blessing in disguise.

“I was concerned about the fatigue and exhaustion getting to people because there’s so much to fight for right now,” he said. “The silver lining of this thing happening with Kavanaugh is I think that it’s reminding people of how important it is to stand up, step up, speak out, and be involved.”

“The way some of the senators on the judicial committee have acted is going to end their careers. I think women and those of us who are allies of women are ready to say, ‘Times up.’ I think people are just done with that kind of misogyny.”

“This is motivating people again, and activating people again, in a way that I think is going to lead to a massive turnout for the midterms,” McGregor said. “I think you’re going to see much more involvement from women and people in marginalized communities than you have in a long time because there’s a lot at stake for all of us.”

For people who don’t think they can make a difference, McGregor has a simple challenge: try it and see.

“We still have a lot of people right now who doubt that their participation matters. Some of that’s due to the last election, and some people don’t think that their voice counts. And what I would like to challenge those people to do is to give it a try. ”

“We’ve really never come out in mass numbers and tested that,” McGregor said. “So give it a try. Step out and vote, and make your voice available to be a part of this democracy, and let’s see what happens.”

McGregor says that recent issues in the news give women and people in marginalized communities a uniting factor.

“I told people the other night, when I was on a panel about modern-day feminism, and I said the white, straight, rich men that are in power have something that unites them, and that’s power and money. Those two things unite them, and will constantly unite them, and they always vote.”

“What we haven’t had, the rest of us in the world, is that one common issue to hold on to that brings us together, and motivates us enough to cause mass involvement,” McGregor said.

“The two issues we have right now are women’s rights — which affects every one of us because all of us have women that we love in our lives, no matter who we are — and the young people demanding responsible gun legislation, are things that can unite us. No matter you are, gay or straight, no matter what race you are, those are issues we can all care about. ”

McGregor is focusing on a few specific issues in this election.

“Overall gender equity is big in my mind,” he said. “I think that affects everyone. And that’s something I’ve been working towards for a long time. I see things rolling back in that, and I don’t want to see that continue.”

“The other thing is health care. Everyone has the right to health care and we weaken our country and communities when we don’t care for people.”

“Those are probably the two biggest things and immigration reform,” he added. “The way these families have been treated is awful. We can’t stand for taking children away from their parents. I’ve talked to people who were in Japanese internment camps, and it boggles my mind that we’re doing that kind of thing again.”

Thinking beyond our immediate circumstances and considering the impact of these elections on should be a motivating factor, according to McGregor.

“We all have to think about how the policies in our country affect other people in our lives that may be more marginalized than we are, and not just have a narrow focus on our own situation,” McGregor said.

“Think about the single mom, think about immigrant families, think about people of color, and what they’re dealing with our country right now. We have to think outside of our own narrow view. “