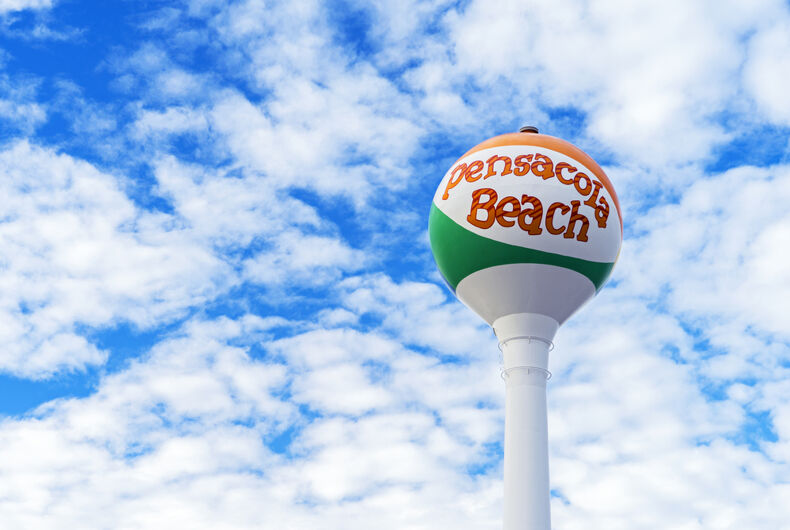 Emma Jones was one of the greatest LGBT allies in the 1960s in northern Florida. Too bad she didn’t actually exist.

When a reporter once went looking for the mysterious woman he was told, “Honey, the Emma Jones Society is you and me and every other faggot in this town, and nobody here gives a damn who Miss Emma Jones herself is.”

Emma Jones turned out to simply be a cover for a regular gay gathering on the beach in Pensacola Florida, starting on the Fourth of July in 1964. The Advocate once described the celebrations as one of the “largest gay organized events in the country.”

That’s pretty remarkable considering how conservative the Panhandle of Florida is – even now it’s still known as the “Redneck Riviera.”

While today the area has a handful of gay bars, back then, there was nowhere for the gays to go. The police would raid any place they would conjugate. Parks and restrooms were the only place to meet.

That’s the way things were until Ray and Henry Hillyer decided to change the status quo.

The couple shared a last name, which was almost unheard of in those days. The radical pair moved to the area in the 1950s. Ray was an artist for the St. Regis Paper Company and Henry worked in the display department at Gayfers Department Store. Despite its name, it had no connection to the LGBT community.

In an effort to network more with local gay men who felt they had no social outlet, the couple set up a P.O. Box under the name Emma Jones to receive LGBT-related media such as One Magazine. They picked the name because they felt it was average, boring, and wouldn’t draw much attention.

And for many years it didn’t.

Once a month a New Orleans lady friend would come to the area to check the P.O. Box in the name of Emma Jones and deliver the material to the Hillyer’s house.  The Hillyers sought to share this experience with other gays in the area.

At first it started off with close friends of the Hillyers but word traveled and it soon became a much larger group.  In keeping with the idea of maintaining this safe social outlet for gays in the area the Hillyers began keeping a social registry.

By the early 1960s the Hillyers decided it was time for something bigger than a social registry and a P.O. Box so they came up with the idea of throwing a beach bash. They chose the Fourth of July, a pretty radical idea for that time period in an area that was so conservative. Initially, instead of hiding, they chose the most public and crowded place they could for the holiday celebration.

And that’s how the first gathering of the “Emma Jones Society” came into being.

Over the years these gatherings continued to grow and attract more attendees. While the actual numbers are difficult to determine, it is thought that the events drew the same amount of people, or perhaps even more, than the much more famous Christopher Street Liberation Day celebrations in June that started in 1970 following the Stonewall Riots in 1969.

By 1970, over 1,000 people were attending. With those kinds of numbers they could no longer be as inconspicuous and decided to move the crowd indoors. The event moved to Pensacola’s historic Hotel San Carlos, affectionately known as the Gray Lady of Palafox.

Built in 1910 as a grand jewel of the Gilded Age, the hotel in the ‘70s was a shadow of its former self. As a result, the hotel welcomed the gay community especially since they had more expendable income than straight couples and families that once frequented the establishment.

In fact, the hotel had already been noted in many gay guides as a popular place to stay in the Pensacola area. Tropic, The Miami Herald’s Sunday magazine, even took note, writing of its former glamor, “its bars and men’s rooms were all that remained popular.”

The hotel suggested the event be billed as a convention. With such a platform came the use of a giant ballroom and discounts on rooms. The hotel even opened an additional bar on its top floor to cater to guests.

For the next few years the gay men would start the day out at the beach and make their way back to the hotel’s ballroom where there would be music, dancing, drag shows, and contests. One such event was the Red, Hot, and Blue Revue where men would compete as female impersonators. Sometimes women would join in, leaving the audience to guess which entertainers were actually female.

Eventually a reporter 200 miles away in New Orleans caught wind of Emma Jones and her annual celebrations. Benton Abbey was intrigued and wanted to meet this mysterious woman. At the time he worked for The Figaro, a New Orleans based newspaper in the 1970s known for its reporting of unconventional news topics, such as homosexuality.

In 1971 he attended the annual gathering and found himself standing in the lobby of the Hotel San Carlos and amidst the many gay men around him were signs noting the “Emma Jones Society Convention.”

Not knowing what to do next, he stopped someone and asked, “Who is Emma Jones?”  The stranger put his hand on Abbey’s cheek and said, “Honey, the Emma Jones Society is you and me and every other faggot in this town, and nobody here gives a damn who Miss Emma Jones herself is.”

Abbey was concerned that without Emma his story would fall apart. But he didn’t leave. He stayed to see what else he could come up with.

He described the hotel as “faded Floridiana,” referring to how you could once see the marvel of early 20th century architecture the hotel still possessed, mixed with bland second rate Art Deco, as well as furniture and objects he claimed could be obtained in a discount store.

The one thing that stood out in Abbey’s mind as he interviewed attendees was that the men who were frolicking around in their underwear, or cross dressing, were bank tellers, writers, record store salesmen, etc.

They were people you saw every day.

Abbey even noted in his story that if it weren’t for seeing them in this context, these would be the kind of guys who would take your sister home.

He noted that for this weekend every business around downtown Pensacola seemed gay: every bar, every restaurant, and every store. When he asked a cashier at one of these businesses what she thought of all this controversial activity, she just looked at him and said, “It’s money, honey.”

And even though Abbey never did find out who Emma Jones was, he still published his rather brief story in the newspaper detailing the weekend’s events.

After that, other media outlets started picking up on the convention as well. In 1972 the Pensacola News-Journal took note of the annual event’s “Mr. US Gay” contest. Eleven contestants competed for the $100 prize money but the winner, a young New Orleans man, refused to give his name to the paper.

But like most good things the Emma Jones Society Convention came to end in 1974 when the last party was held. In a way the informal organization was a victim of its own success. As it became more popular, attendance grew, and as more media outlets wrote about the celebrations, the local backlash grew as well.

For a while, as mentioned above, some locals overlooked the “deviants” as long as they brought money to the city.

Jerry Watkins III, who has researched the convention in great detail, said of the event near its end, “The Emma Jones Society parties [the Hillyers] hosted were written about as a gay event on the front page of the paper by the 1970s. To be clear, repression was swift and severe when somebody stepped too far out of line. And one of my main arguments is that when a politician or city needed an image boost in the ‘tough on crime’ or family friendly department, LGBTQ folks proved easy targets.”

And that’s just what happened.

Some attendees started receiving death threats, local ministers organized against the convention, and the city council started to work closely with law enforcement to find ways to curb the annual event by raiding popular bars catering to gays such as the Yum Yum Tree and the Red Garter. More than 30 people were arrested that final weekend alone and charged with “lewd and lascivious acts.”

“We set out to laugh and be merry with our friends,” the Hillyers told the Tropic reporter. At this point even they remained anonymous out of fear of repercussions. “It’s a shame people won’t accept that. You’d think in the 1970s, people would let you alone.”

Once the Emma Jones Society faded away came a new era of LGBT visibility in the area with the opening of year-round gay bars.

The event certainly fostered long lasting relationships and it was those bonds that would eventually go on to create a similar event in 1981 during Memorial Day weekend – The Pensacola Memorial Day Beach Pride.

Of course not everyone was happy. In 1993, Pensacola City Councilman Doug Profitt said he felt Pensacola should not be known as a “gay friendly destination.” Even so, enough local business owners came forward expressing their appreciation for the strong positive economic impact on the area. This turned out to be enough to hush the conservative opposition.

Today the event continues every year with over 40,000 in town for the festivities.

If you’re interested in reading more about this event, check out Jerry Watkins III’s new book “Queering the Redneck Riviera: Sexuality and the Rise of Florida Tourism.”

20 years after he died, Matthew Shepard’s ashes will be interred at the National Cathedral