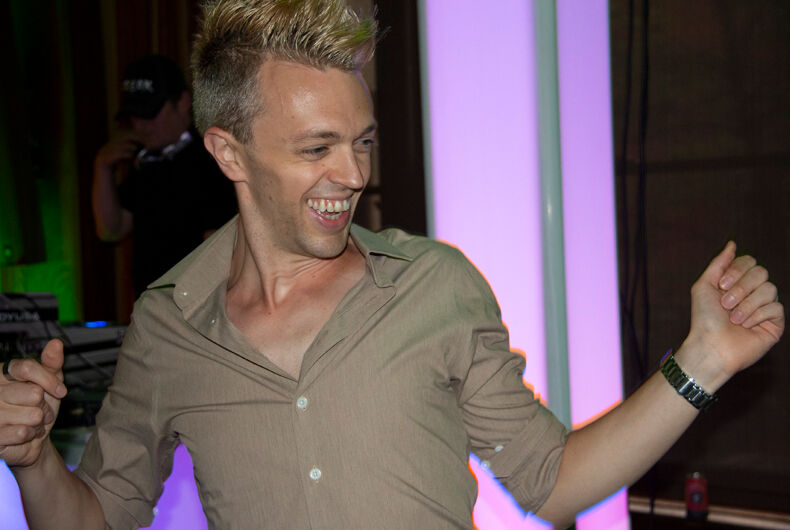 An Ohio couple has revived the tradition of Sunday tea dances, creating a safe space for a new generation.Photo: Richard Sanders/Rock Doc Photography

A gloomy, rainy Sunday in September couldn’t stop what was originally planned as an outdoor tea dance among the trees and fountains of Washington Park in Cincinnati. The gay tradition, revived last year in Ohio by a couple who lost their go-to bar, simply moved across the street and indoors.

Even inside the majestic, century-old Memorial Hall, though, Cincinnati’s 2018 version of the tea dance is still far more out-in-the-open than events of old. The once- or twice-monthly dances rotate from location to location in Southwest Ohio and Northern Kentucky, from hotel ballrooms to restaurant rooftops and theater lobbies to straight bars.

They serve much the same purpose they did back in the day.

“We created the tea dance to stay connected,” says Richard Cooke, who along with his husband, Marty Wagner, brought back the almost lost tradition in April 2017 after their own hangout, the Famous Neons Unplugged, closed for good in Cincinnati’s gay-friendly Over-the-Rhine neighborhood.

Cooke and Wagner did more than just stay connected with their own friends, though. They recreated a safe space for the LGTBQ community, both physically and in spirit, that has drawn both those who remember tea dances of old and those who came along far after their decline.

“I love the diversity. It represents the vitality of the LGTBQ community here in Cincinnati,” Cooke says. “Everyone is welcomed.”

At least 300 people attended the Sept. 9 dance, the first of two scheduled that month. From 4 p.m. to 7 p.m., people of all ages were coming and going. An opposite-sex couple and two young girls were among the first on the dance floor.

“It’s super inclusive, everyone is here to have a good time. There’s no negativity, no drama,” says Henri Maicki, who lives in Over-the-Rhine. “It brings in a really cool community that’s not out and about in Cincinnati.”

Tea dances date back to a time when it was impossible to be out and about anywhere.

“There was a time when you had to be secretive, where you didn’t want your name associated with the word gay or you would lose your job,” says Jim Gooding, who came down to Cincinnati for the Sept. 9 tea dance from Franklin, a town 40 miles to the north.

Back in the 1950s and ’60s, local laws and government actions around the country effectively outlawed gay bars. Owners risked losing their liquor licenses if they were caught selling alcohol to LGBTQ clientele. It was illegal to dance with someone of the same sex. (It also was illegal to wear clothing associated with the opposite gender.)

People adapted. When police would come into gay bars—it happened regularly and in 1969 sparked the Stonewall uprising—same-sex couples would quickly rearrange. It eventually led to a new way of dancing that remains today; to avoid getting arrested, couples simply began dancing apart.

“A lot has changed,” Gooding says.

Tea dances, which had been around since the 19th century in straight society, were a perfect fit for the LGBTQ community of decades ago. They traditionally took place in the afternoon, when police weren’t on the lookout. When the gay social scene developed on Fire Island in New York, the afternoon time allowed people catch their ferries back to the city.

Tea dances eventually migrated to Greenwich Village and began attracting younger, less affluent gays. T-shirts and denim became the attire, and the events alternately became known as T dances. The idea of Sunday social gatherings for LGBTQ people lives on with the idea of Sunday Funday.

Matthew Jones, a visiting assistant professor of women’s, gender and sexuality studies at Miami University in Oxford, Ohio, says the LGTBQ community should embrace its own identities and culture.

“I think that as queerness becomes more accepted by straight culture, we run the risk of assimilating in the same way that other minority and marginal groups do,” he says. “The pull of that kind of normalization is strong, but the price of admission to heteronormative acceptance is often a loss of the traditions that made our culture unique.”

Tea dances back then weren’t as inclusive as the new series of events in Cincinnati. Jones attributes the division to living in different “spheres.” The dancing-apart trend happened, according to historians, when tea dances and gay bars became men-only spaces.

“Social, political, intellectual and cultural lives overlapped only a little,” Jones says. “Gay men’s and lesbian women’s cultures came together in the 1980s during the AIDS crisis, when lesbian (and some straight) women stepped up to do the work of caring for gay men who were sick.”

That’s also when tea dances began to fade away, a trend Jones suspects is in large part because of the AIDS epidemic and its impact on gay men.

“With their deaths, so, too, died many subcultural practices,” he says.

Technology and bars also were a factor in the demise of this almost extinct celebration.

“I think we need to work to maintain queer spaces and queer cultural traditions,” Jones says. “Without them, we lose an invaluable lifeline to our own past and our own future.”

But technology is part of its revival.

“It rekindles the importance of meeting people face-to-face,” says Ron Bails-Forbes of Cincinnati, who came to the September dance. “There’s no substitute for personal contact.”

These lesbian moms both carried the same baby in groundbreaking pregnancy

The popularity of Halloween in America is due to gay culture