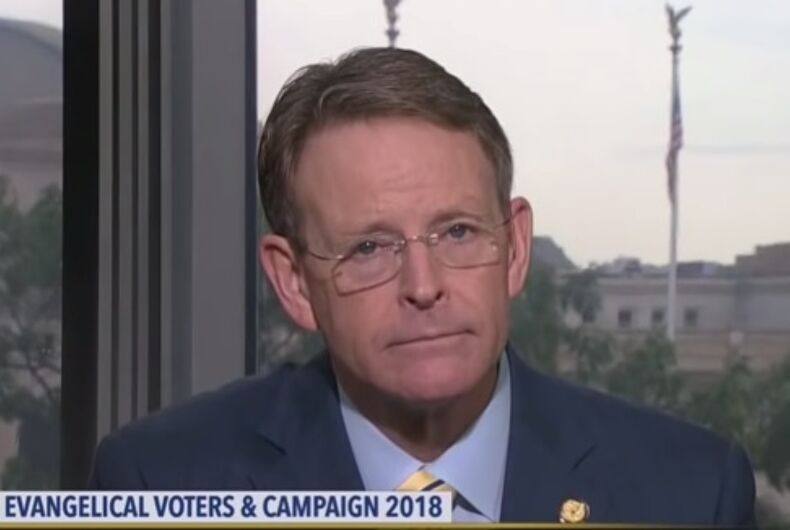 C-SPAN callers ripped into Christian hate group leader Tony Perkins live on television yesterday. Perkins is the head of the Family Research Council, a far right group that masquerades as a Christian charity.

One person castigated Perkins for abandoning Christian principles like love and helping others to become a “worshipper of Trump.” Another caller questioned how evangelicals could support a person accused of adultery and sexual assault.

“I was an evangelical Christian,” Steve, a caller from North Carolina said. “But I gave that up. I went back to being a true Christian.”

“A true Christian follows the teachings of Jesus,” he continued. “Evangelicals have become paranoid, white Christians losing their country to minorities. They have only one goal and that is to keep America white and Christian. And that’s exactly opposite of what Christianity is. Christianity is about love and helping others and taking care of others.”

“The paranoid white Christians have now become worshippers of Donald Trump. They follow all of these false prophets out there living in $16 million houses, flying around in $10 million jets. They need to wake up. Jesus is love, not hate.”

Perkins disputed that his own savior, best known for his radical inclusion and love for humanity, preached a gospel of love.

“I know we want to describe Jesus as all love,” the evangelical leader opined. “He is love, but he’s truth. And we cannot sacrifice his truth because if we do that, we’ll never experience his love.”

Perkins defended evangelical support for the less-than-Christ-like President by saying Hillary Clinton’s policies (as versus her private life?) weren’t Christian enough for their liking.

“The choice was between Donald Trump and Hillary Clinton,” Perkins replied. “Hillary Clinton openly supported policies that were antithetical to Christian beliefs. What were we to do?”

“Between that and Hillary Clinton, it is no-brainer,” Perkins added. “We supported him. We said we said we’re going to give you a chance. We don’t agree with what you [did] in the past. We think your lifestyle is anathema when it comes to the standards and values we embrace, but here is the choice. We gave him an opportunity, and he has not disappointed us.”

Trump has gone down the evangelical wish list and checked most of the boxes they’ve demanded for their support. He has stacked the judiciary with far right appointees, dismantled civil rights protections, and attacked LGBTQ people nonstop.

He was fired for spreading antigay hate. His former boss just gave him a $1.2 million payday.