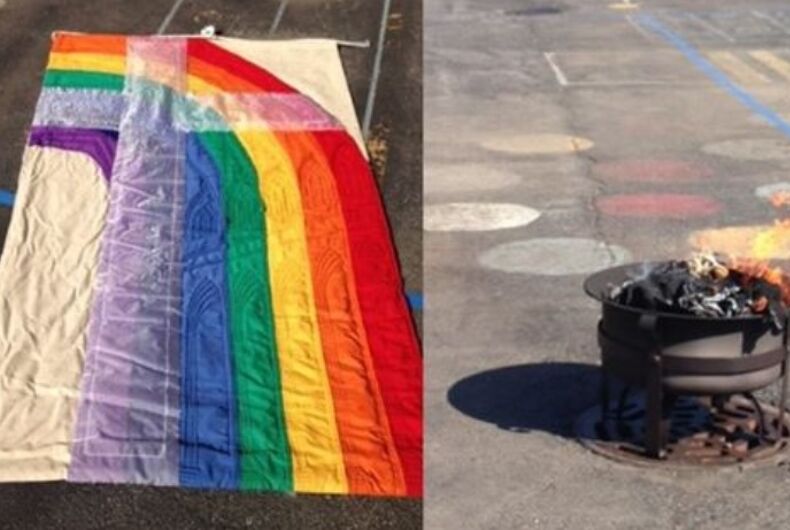 A Catholic priest in Chicago burned a flag that portrays a cross and a rainbow last Friday to protest homosexuality.

Paul Kalchik, the priest, burned the flag and said a “prayer of exorcism” over it, defying orders from the Archdiocese of Chicago not to do so.

“So in a quiet way we took matters into our own hands and said a prayer of exorcism over this thing,” he told NBC News. “It was cut into seven pieces, so it was burned over stages in the same fire pit that we used for the Easter vigil mass.”

The flag used to hang in the Resurrection Church in the 1990’s, when Daniel Montalbano, who was LGBTQ-friendly, led the church.

According to one parishioner, when Montalbano died in 1997, the banner was put into storage.

After it was found recently, Kalchik announced in the church’s newsletter that it would be burned.

“On Saturday, September 29, the Feast of Saint Michael, Gabriel and Raphael, we will burn, in front of the church, the rainbow flag that was unfortunately hanging in our sanctuary during the ceremonial first Mass as Resurrection parish,” the September 2 newsletter said.

The archdiocese stepped in and told him not to burn the flag. “We can confirm that the pastor has agreed not to move forward with these activities,” an Archdiocese spokesperson said last week.

But Kalchik decided to go ahead with the exorcism ahead of schedule, saying that they didn’t do it in front of the church like originally announced, so he wasn’t technically breaking his agreement with the archdiocese.

“We did so in a private way, a quiet way, so as not to bring the ire of the gay community down upon this parish,” Kalchik said.

“It’s our full right to destroy it, and we did so privately because the archdiocese was breathing on our back.”

“We put an end to a depiction of our Lord’s cross that was profane,” he added, calling the flag “sacrilege.”

He also told NBC News that he believes Leviticus’s death penalty for homosexuality is “quite literal.”

“Those involved in this desecration are violating the core values of the Catholic faith,” said Marianne Duddy-Burke, executive director of Dignity USA, an organization for LGBTQ Catholics.

“They are hijacking the parish to further an extremist agenda, and damaging the community in doing so.”

The archdiocese said in a statement that it was “unaware” of the exorcism.

If Kermit & Miss Piggy are a couple, why can’t Bert & Ernie be gay?