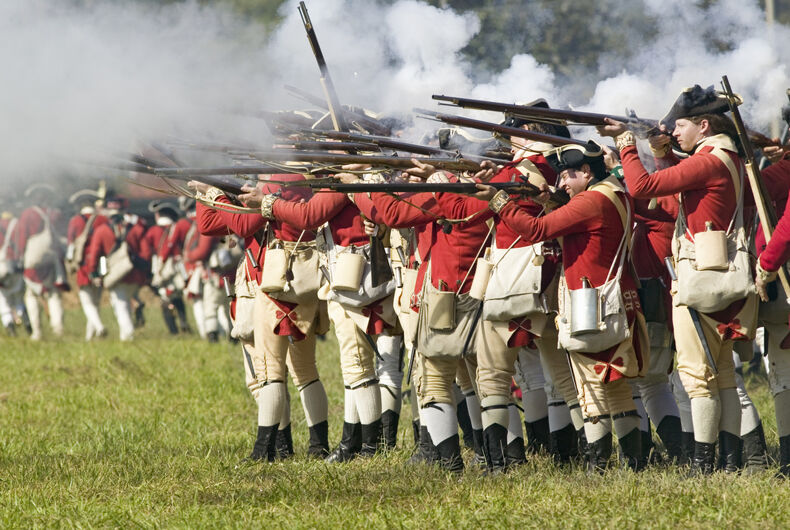 Soldiers fire at the re-enactment of the 225th anniversary of the Victory of Yorktown, Virginia.Photo: Shutterstock

“Ex-gay” activist (and all around loon) Robert Oscar Lopez is back with another one of his ridiculous anti-LGBTQ claims that’s just too rich not to pass along. Sadly, you know somewhere out there someone is believing it too.

This time Lopez is atwitter that the English organization Living Out has designed a questionnaire churches can use to audit how LGBTQ-friendly they are. The group says the 10 question checklist will help churches become “biblically inclusive.”

Since Living Out is an Anglican organization and the questionnaire is being used by what Right Wing Watch calls “a handful of American churches,” Lopez has determined that British authorities are trying to undermine the American Revolution.

“Would this not seem like the Church of England and Parliament is imposing homosexuality on American churches?” Lopez asked. “We fought an entire revolutionary war so that this would not happen. The people who gave their blood, sweat, and tears in the Revolutionary War did that so that Parliament and the Crown of England could not dictate to us our faith.”

“The Crown of England and Parliament have dictated that we have to allow the male prostitutes back into our temples,” he fumed. “They’re using these go-betweens between the Anglican Church and the Southern Baptist Convention to undo the American Revolution! I cannot emphasize this enough.”

Watch the video from MassResistance below; the group has been designated an official hate group.