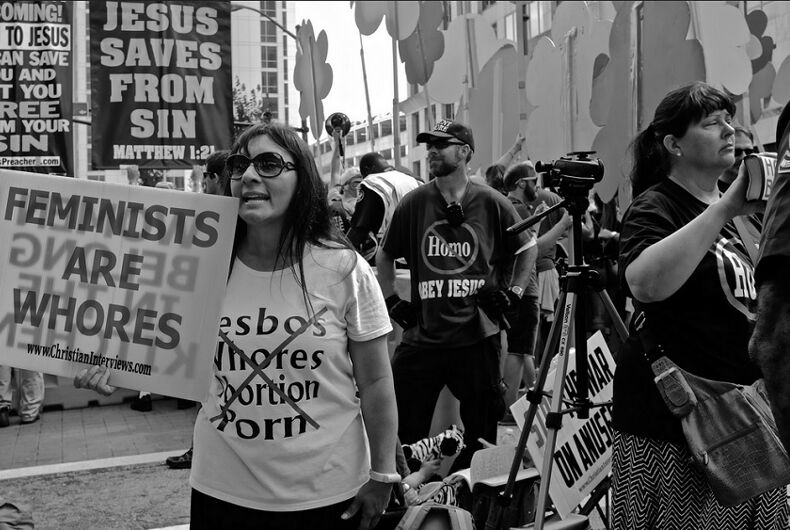 A federal court ruled that the city of Nashville violated the free speech rights of anti-gay protesters by asking them to move across the street from pride festivities.

In 2015, John McGlone and Jeremy Peters stood on a sidewalk at Public Square Park during Nashville Pride, using bullhorns and audio equipment to declare their hatred of gay people.

A police officer who was working security for the pride festival told them that they’d be arrested if they stayed on that sidewalk. So they crossed the street and continued their protest for a few hours.

McGlone and Peters sued. The city said that it had a right to ask them to move since they “interfered” with the message of the pride festival.

They lost at the trial court, but this week the 6th Circuit Court of Appeals found in favor of the anti-gay protesters.

“Nashville’s explanation leaves no doubt that but for the anti-homosexuality message that McGlone and Peters were advancing as they stood on the sidewalk, they would not have been excluded,” the ruling said.

“How, then, can Nashville argue that its restriction of the preachers’ speech was not content based?”

The decision said that the anti-gay protesters weren’t trying to speak for the pride festival, so they couldn’t have “interfered” with the festival’s free speech.

“They stood outside and expressed a contrary message,” the ruling said.

In 2017, Judge Waverly Crenshaw ruled in trial court in favor of the city, citing the amplification equipment as particularly disruptive. He wrote that the Constitution does “not guarantee the right to communicate one’s views at all times and places or in any manner that may be desired.”

“In this case, the facts are undisputed that Plaintiffs continued to preach with bullhorns for some four to five hours during the Festival and their message was heard loud and clear by those passing by,” Crenshaw wrote, arguing that both sides were able to present their views.

“The municipality regulated the first group’s position in a way that did not silence them or seriously curtail their communication. It simply required them to cross the street.”

The city has not announced whether it is appealing the ruling. If it does, then the full 6th Circuit Court may overrule the three-judge panel’s decision.

Hours after raping a gay man, the attacker was killed in a shootout with police